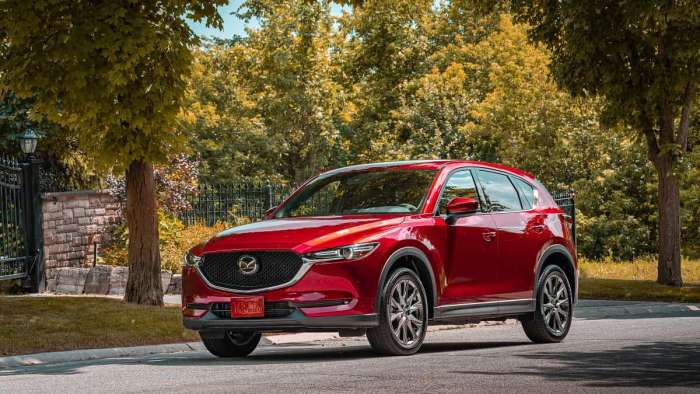 In case you had any doubts about which two-row crossover the folks who live to drive like best.
Advertisement

Mazda’s top-selling CX-5 crossover has earned its fourth Car and Driver 10Best award. In a row. The CX-5 continues to be ranked among the top crossovers for those who value a rewarding driving experience.
“The Mazda CX-5 is the crossover we recommend to friends who are shopping for crossovers,” said Sharon Silke Carty, editor-in-chief of Car and Driver. “It is polished enough to compete with more upscale brands, and its effortless steering and controlled suspension make it fun to drive. It has the right combination of good looks, price and handling and has become a regular on our 10Best list.”

Car and Driver’s testing staff evaluates dozens of vehicles during weeks of testing, before voting on its 10Best winners. The award recognizes the smartest, most entertaining cars, trucks, SUVs, and vans available in the U.S. market. To be considered for a 10Best award, a model must be new or substantially changed from the prior model year, or be a returning winner from last year’s awards. The base price of the CX-5 is more than $60K below the maximum $90,000 allowed by the program’s rules. “We judge vehicles with an emphasis on value, mission fulfillment, and whether they are fun to drive,” Carty said. “Each of the 10 winners competes against the entire market to earn this recognition.”

So why does the CX-5 win so many awards year after year? One reason is the refinement and features the CX-5 offers. The CX-5 is a premium vehicle hiding in the mainstream segment. Features like a multi-informational head-up display and adaptive LED headlights make it stand out from its peers. The turbocharged engine is also a plus. With 320 lb-ft of torque, the top-trim Mazda CX-5 has nearly twice the torque of the Subaru Forester’s top-trim.