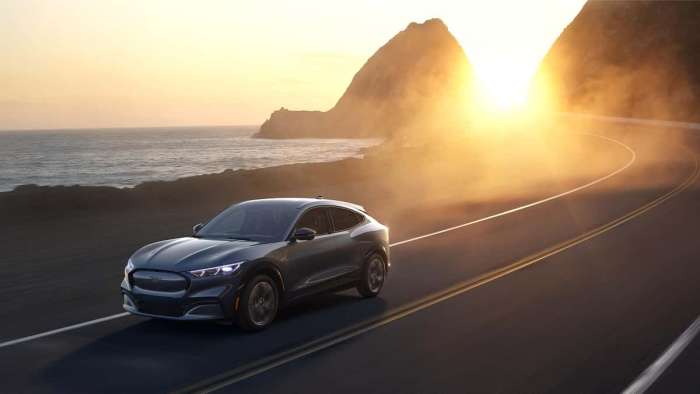 Two long-time electric vehicle fans (husband and wife) have finally found the right vehicle for their needs. M and R, as we will call them, have been looking to buy an EV for many years. Nothing from GM, Nissan, or Tesla was right for them. However, when the Mustang Mach-E made its debut they became serious. Now they have two on order. Here is their story.

Q) Tell us how you came to buy a Ford Mustang Mach-E as your first electric vehicles.
R answers: Although we are married we came to the purchase decisions from totally separate criteria. I was not aware that M even wanted one until after we did the test drive. Back in the mid ’70s, I bought my first (used) car. I thought in the ’80s when it came time to buy a new one, EVs would be available, ahh the innocence of youth. The ’70s were the beginnings of Earth Day and concerns about the environment.

M answers: I ask myself this about any EV: “Would you buy it if wasn’t a full electric?” If the answer is "yes," then it’s a good car. It’s electric, that makes it a good car that’s electric. I’ve been doing research for as long as R but from a different perspective. …Is it useful, will it do what I need, and will the electric part get in the way? The answers to those questions lead me to think about how to eventually ease in and replace my ’17 CX-5 someday. Well, Ford’s quickly approaching 200,000 unit limit for the $7,500 rebate moves the calendar up a year or so. In this case, indecision costs some serious money.

I was looking for longer range at a reasonable price with good quality and options for repair sites. Also wanted better charging networks. Back in 2015, even Tesla had some huge gaps. I was concerned about occasional long road trips and concerned we would have problems. Today the Tesla network is good, and I’m hoping that the feds can get more generic chargers out there for the non-Tesla owners. Based on the videos I’ve seen, Ford has a good way of helping with range anxiety and is exceedingly conservative about the approximate range. I really appreciate that . . . better safe than sorry. The other thing is that I’m reading that there may be gas shortages again, and those prices are just going to go up. I’m ready to bypass gas at this point.

M answers: Why not a Tesla? I’m of the opinion that Tesla should stop building cars and ship batteries/chassis to carmakers. The glass roof falling off a Model Y on the way home from the Tesla dealer delivery is telling. Tesla was a trailblazer at first, but they’ll fall in behind the actual car builders in a few years. You can’t fight the sheer muscle of the Big 3. Wait till there’s an E-Camaro, E-Charger, E-F150, E-Ram, E-….. you get it.

Related Story: Here's Why a Tesla Owner Opted For a New Ford Mustang Mach-E Instead of a Model Y

Q: What vehicles are you coming from?
M answers: 2017 Mazda CX-5. For capacity, the Mustang Mach-E a dead ringer for the CX-5, plus it has a frunk. And Apple CarPlay. And a glass roof.
R answers: 2007 Lexus IS-250 AWD. The Lexus is an automatic with AWD and a “snow button” that actually worked. So between the Extended Range, AWD and Silver, it hit all the right buttons. The ride is not quite as smooth as the Lexus, but it’s a very heavy SUV, not quite the same.

Q) Which trims did you select and why? Which colors?
R answers: Premium, extended range, AWD. Silver. This will be the sixth car I’ve ever owned. First (used) was white . . all others (new) Silver. . I just like it. I think it looks good and doesn’t show as much dirt as some other colors. Until my latest car (Lexus, see below), I had all econo-boxes with manual transmissions. I liked the control in the snow (lived in NJ then).
M answers: Same, but Dark Matter Gray. 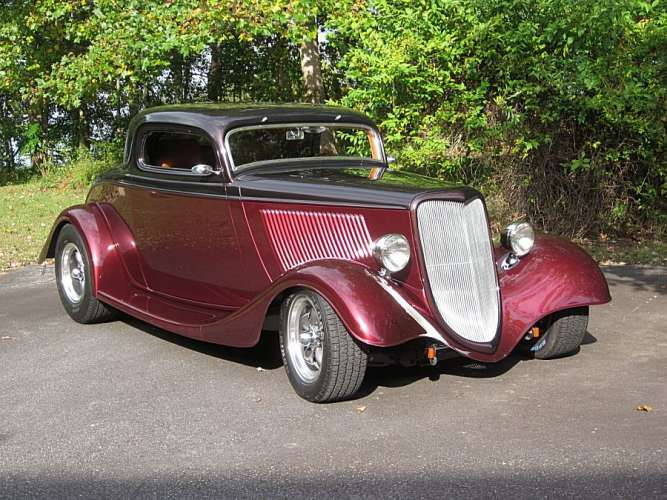 Q) Any interesting cars in your past?
R answers: Until my latest car (Lexus IS), I had all econoboxes with manual transmissions. I liked the control in the snow (lived in NJ then).
M answers: I owned a ’64 MGB and a ’64 Jag E-Type in HS (’74, 75). I built a 34 Ford Hot Rod coupe (see image above) I painted my first car at 13, I do all my own work except the stitching.

Q) When will the vehicles be delivered?
R answers: Not soon enough! Ford said 24 weeks when we put the orders in, but even that could be optimistic.

Q) What is your charging plan?
R answers: We own our home and will have a 240 V plug installed in the garage. M can answer the how. Most of our driving is local, but will use the charging network for occasional road trips.
M answers: I’ve wired buildings and homes. A 240 outlet a few feet from the box is fairly simple. On gas, we fill our tanks. On batteries, we can stop fill just enough to get home, where the filling station is. It’s a 180-degree change in the way we think about fuel management. We focus too much on the time it takes to fill up dead to 80% at a charging station. We should instead remind people that the charging station is at home, we only need to juice up enough to get home, if ever. I’m fairly sure I’ll never need to pump gas again, and rarely stop for a charge away from home. Every time I leave home, I’ll have a "full tank."

We’d like to thank M and R for taking time to explain to us why two long-time EV fans made the Mustang Mach-E their first (two) electric vehicles. If you recently bought an EV, feel free to let us know what led you to make the move now in our comments section below.

Charlee Smith wrote on May 11, 2021 - 6:06pm Permalink
I'm replacing our 2006 Lexus RX330. The Jaguar I-Pace (with its great styling) was the first EV to spark my interest, but like the Tesla Model S was far over my budget. I narrowed by choices to the Genesis GV80, the Toyota Venza Hybrid and the Ford Mustang Mach-E. The luxury offered by the Genesis was hard to resist, but by the time I actually sat in one, I felt it was not a significant enough improvement over my wife's 2019 Acura RDX. One drive in the Venza, with its numb feel and generic looks, eliminated it. With the initial glowing reviews of the Mach-E, I put a deposit down in January and a test drive in February verified I had made the correct decision. With the EV incentives, we'll be spending just $3K more than the cost of the Venza and we'll be getting the same cargo capacity as the Lexus and our Acura, which will still be our long distance vehicle for probably the next 8 years. Seeing the Tesla Model Y in a mall showroom, where its styling flaws are not as obvious as they are when seen on the road, can make them hard to resist. The Model Y's lack of a screen in front of the driver, however, was as much a factor as the styling in keeping the Tesla off our list. We installed a home EV charger last month, so we're ready for our first EV, the Mach-E, to arrive in early June..
John Goreham wrote on May 12, 2021 - 11:55am Permalink
Thank you for adding this comment, Charlee. The Venza and GV80 didn't stir my soul the way the Mustang Mach-E did. I will say this as the owner of a 2007 Highlander. Whoever gets your '06 RX330 is going to get a great used crossover! That is a perfect car for a young person with a limited budget and the need for safe, reliable local transportation.