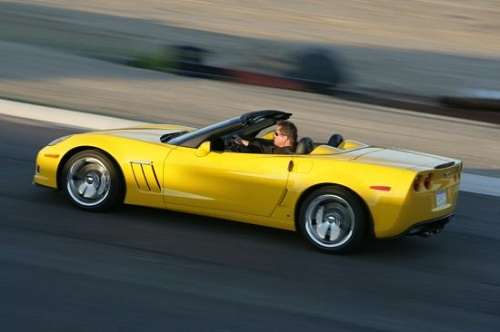 The new Corvette Stingray has everyone suffering Corvette fever. Here is a remedy you may never have considered.
Advertisement

The 2014 Corvette Stingray has been launched with much fanfare. The car is fantastic and will be a huge success. However, the truth is that many Corvette fans simply do not have the means to buy a new Corvette the year it launches. That is perhaps the worst time to buy because the newness attracts more buyers than cars and the prices will not be discounted. Another reality is that a new Corvette, even at a discount is still beyond the reach of many enthusiasts.

Buying a certified pre-owned (CPO) Corvette is certainly a god idea if you can find one. However, CPO cars are usually not sold at a discount. They have other value benefits such as a warranty, but compared to a private purchase, they are really not a steal. One can buy a used Corvette, but without the benefit of a warranty and with the lingering worry that the car has been abused (as many sports cars are) that may not really satisfy everyone’s dream of owning sa “perfect” Corvette they can then keep nice for many years.

There is one way to find one’s self in a Corvette with extremely low miles, and a full factory warranty. It also comes with the added benefit that the car will have all the service records and also be at a discount. Even better, the cost of ownership of the car is already determined. Assuming a lease is what we are talking about here and it is becoming more and more popular.

How a Lease Swap Works
Leases have always been transferrable. It is not new. However, for many years there was no way to find a car one wished to assume a lease on. That changed about 12 years ago. Swapalease and others started a trend that is now big business, yet is still not well known. For the person assuming the lease it is very easy. All one needs to do is search a website set up by a company such as Swapalease or Leasetrader and input the car they want. We put in Corvette and found multiple listings on both sites.

Once a person finds a car they might be interested in the work is pretty easy. In order to determine if the deal is favorable, simply compare the lease payments to what one would otherwise pay per month for a Corvette obtained from a dealer as a CPO car, or on a private loan. Then consider the residual value of the car at the lease’s end. If that buy-out price is attractive, the car can be bought. If not, it can be turned in. The only costs other than the monthly payments are a small lease transfer fee. According to Scot Hall, executive vice president of operations at Swapalease, that fee is usually only about $300. Considering that is almost exactly th4e same as the “Documentation fee” that all dealerships charge on top of the sell price of a new or CPO car, the fee is a wash when compared to the cost of acquiring a car owned by a dealership.

Why Do People Want To Exit a Lease
Mr. Hall told us in an interview that there are really two reasons why people want to transfer a leased car, and the Corvette model is an excellent example of a car that might fit both scenarios. First, there is the change in family reason. Youngish man gets a bonus at work. Uses the bonus as the initial down payment on a leased car and drives home a leased Corvette. Two years later that man is now married and has a child on the way. Bye Bye “vette, hello Chevy Traverse.

Reason number two is less of a happy scenario. Same guy loses his job at the green energy factory due to a “workforce reduction” and simply can’t make the payments anymore. Mr. Hall tells us that some manufacturer’s captive financing companies refer clients to Swapalease. They are able to exit the lease of their expensive and impractical car, and preserve their credit.

What Are the Financial Benefits of Assuming a Lease
When one assumes a lease there are three main financial benefits. First, the person who initially leased the car made an initial payment of some thousands of dollars. That equity is still in the car and the person assuming the lease does not have to come up with any real cash down. Second, the residual value is known. In other words, the car can be bought if it is a good deal at the end of the lese, or turned in. Unlike a CPO car, there is no trade to make at the dealership. We all know the dealers profit on both the trade in and also the new car they sell. A third reality is that the insurance and excise taxes on a car just a couple years old are dramatically lower than a brand new car. That saves literally thousands per year compared to a new car lease.

Are There Really Any Corvettes to Lease
Unlike CPO cars, which are almost impossible to find these days, there are Corvettes to be had. We did a search of both Swapalease.com and Leasetrader.com and we found multiple Corvettes offered on both sites. There were base models and also Grand Sports. The least expensive payment was $512 and the top of the line was $934 for a Grand Sport Convertible. There are 2013 Corvettes and also ones as old as 2011.

Owning a Corvette is a serious goal for some, and a bucket list line item for many. Assuming a lease may be the least expensive way to get into a nearly-new Corvette with a very predictable cost of ownership.

Sam Holsinger wrote on November 16, 2016 - 5:11pm Permalink
We are looking for a C 7 convertible (or maybe coupe, must have auto transmission. We want to lease. Good credit & have cash for dp. Sam
george landon wrote on January 16, 2017 - 6:38pm Permalink
Look for cheap lease takeover on corvette for less than 24 months. i am in Michigan.