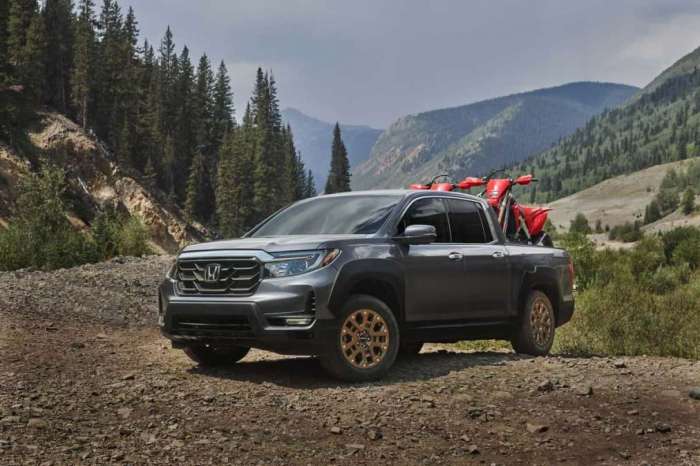 The Honda Ridgeline has a reputation among truck fans as being a bit soft. Honda aims to change that with new styling.
Advertisement

Honda's Ridgeline is a favorite of almost every vehicle reviewer who tests it. At least those who approach it with an open mind. We've tested the Ridgeline a few times, and have found it to have best-in-class comfort, ride quality, drivetrain satisfaction, and surprisingly, user-friendliness. Truck fans don't care. No matter how good the Ridgeline is, unless it is built on a century-old ladder frame it is discounted by that crowd. Shame.

Honda is never going to adopt an outdated design for two reasons. First, it is ridiculous to do so. Second, it would be cost-prohibitive. By sharing the platform with other vehicles Honda produces the best truck in its class by most measures, and does so profitably. What Honda can do is make it look tougher. At least a little. 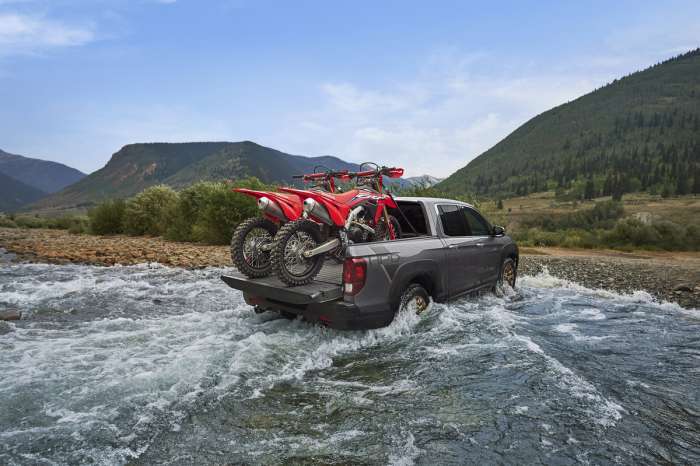 The new '21 Ridgeline features all-new sheet metal from the front roof pillars forward. Changes include a new hood with a pronounced power bulge, and new front fenders that emphasize the squared-off nose and more upright grille. Th grill is flanked by LED headlights updated for better illumination. Atop the grille Honda added a crossbar that bisects the headlight lenses – gloss black on Sport trims and Black edition, chrome on RTL and RTL-E. A new front bumper highlights the new toughness of the updated Ridgeline’s design. New broadside vents route air through the bumper and around the front tires and wheels, creating air curtains to improve aerodynamic performance. The body color paint is also extended farther down the front bumper, and a more prominent skid plate emphasizes Ridgeline’s new look. In back, a reshaped rear bumper shows off aggressive new twin exhaust outlets.

All trims get tougher-looking 18-inch wheels lending the Ridgeline a broader, more planted stance, bolstered by all-season tires with a more aggressive sidewall and shoulder design.

Art St. Cyr, vice president of Auto Operations for American Honda Motor Co., Inc., said in a press release, “Truck enthusiasts have long recognized Ridgeline as an incredibly versatile and capable pickup, and now it’s got the rugged looks to match. The Ridgeline signals a new direction for our light-truck designs, one that more effectively communicates all the hard work that goes into making Honda pickups and SUVs such proficient on- and off-road performers.”

We have to disagree with Art St. Cyr on his commentary. Truck enthusiasts discount the Ridgeline as a "Pilot with a bed." As if that is a bad thing! It is non-truck enthusiasts who have long appreciated the Ridgeline. It is our understanding that Honda builds and sells as many Ridgelines as it choooses to on its shared production line. We hope that the new deisgn captures a few more truck buyer opportunities for Honda, but it would be shocking to us if "truck enthusiasts" found this new style change more than something to giggle about. If it's not a diesel with front and rear locking differentials, truck enthusiasts are not impressed. Unless maybe it's a Raptor. It's their loss.

The Honda Ridgeline is one of the industry's most made-in America vehicles. It is manufactured by Americans along with its V6 engine at the Honda plant in Lincoln, Alabama. Look for the updated Ridgeline at dealers in early 2021.

Patrick Rall wrote on October 8, 2020 - 10:52am Permalink
The other day, I saw a toy poodle wearing a Darth Vader Halloween costume. It wasnt tough, but it certainly looked tough.
John Goreham wrote on October 8, 2020 - 11:05am Permalink
I only buy poodles with locking diffs and snorkels. :)
Timothy Parker wrote on October 12, 2020 - 11:41am Permalink
I'm not sure that larger wheels (not larger diameter tires) is an improvement. A tough vehicle doesn't go with narrow-sidewall tires. For a truck or rugged SUV that could be called on traverse rough areas, I'd much rather have smaller wheels with tires sidewalls that are bigger.
John Goreham wrote on October 12, 2020 - 4:06pm Permalink
You are speaking my language, Timothy! One of my largest pet peeves is Automakers who reduce the sidewall with each passing year and each higher trim level. Very frustrating.
Richard Joash Tan wrote on October 26, 2020 - 11:34pm Permalink
Their loss is MY gain. The Honda Ridgeline IS the BEST and TWICE the truck everyone has ever seen.
Richard Boutin wrote on November 13, 2020 - 11:16am Permalink
Owned Ford, Cheve., toyota, pick up trucks thru the years and loved them all......................until I drove the 2020 Ridgeline..............yes it is a week end warrior''s truck as 75% of PU truck owners never leave the pavement and only a very few" macho" owners go rock climbing on the week ends (imagine trying to tear up a 50 thousand dollar plus truck to show how tough you are !!)..anyway the Ridgeline drives nicely on sane roads with decent MPG for a V-6 engine while still having all the capabilities (and then some ) of any other sanely driven pick up !
David Richardson wrote on December 21, 2020 - 6:07pm Permalink
Waiting for the 2021 Ridgeline to be released. Any word?
Bryan Cassidy wrote on February 21, 2022 - 9:26am Permalink
I have owned an F150 4x4 short box. 3 Tacoma's, one was an TRD Sport 4 D Auto. I presently own a newly purchased Honda Ridgeline Sport. That TRUCK is the best vehicle I have ever owned. Yes apples and oranges but equal to my Subaru Outback 3.6 liter. The two very best vehicles to own for what they were designed to do. Performance, ride, driveability, economy, reliability, resale, Truly the best..