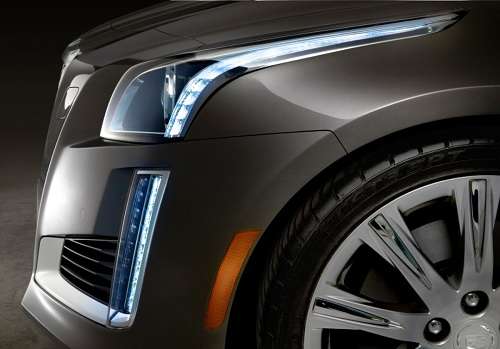 Here is what your next car or crossover will look like

There are three surprising reasons why all cars and crossovers are starting to have the same look up front.
Advertisement

The next car or crossover you buy will have a vertical front grill section that extends from the bottom air dam up to the lip of the flat hood. The hood will be almost completely horizontal and be longer than in the past. “Cab forward” is over. The look of the front of your new car will be of a brick, or in some ways of a bulldog’s face.

It will not matter if your vehicle is a German sports car, American made executive sedan, Japanese family sedan, or one of the very popular compact crossover vehicles. All of them have given up the low slung front nose, and swoopy angular hood that started low and then rose up sharply to meet the windshield. This is no coincidence and there are three reasons why the front of all new cars are starting to look exactly the same.

Pedestrian Safety Standards
The first reason that your new vehicle will have this new flat front and level hood is pedestrian safety standards that started in Asia and Europe and migrated to the US market. Studies showed that pedestrians who were struck by a vehicle were being killed in a very specific way – hitting their heads on the windshield or A pillar. It was discovered that by shaping the front of the vehicle a certain way the pedestrian being run over could be “caught” by the car or crossover and made to impact the softer hood.

The Insurance Institute for Highway Safety has a section on its site that explains the results of designers trying to implement the safety standards this way; “As a result of this research, regulators in Europe, Japan, Korea and Australia have implemented vehicle testing programs specifically aimed at protecting pedestrians. These testing programs focus on pedestrian interaction with the hood and bumper and in some cases the hood edge and the windshield. To perform well in these tests, automakers have been putting more room between the hood and engine, designing pop-up hoods that automatically lift up a few inches upon impact and designing bumpers with more give.”

This is the main reason that your hood is now almost flat. Underneath there is a crush gap of about 4 inches that is there to take energy away from a pedestrian impacting it with their head and upper torso. The flat front of the car, that used to be very steeply raked, is there to sort of tip over the pedestrian to a prone position to hit the hood flat after impact. This keeps them off the windshield and A pillar, the support rising from the corner of the hood up the side of the windshield to the roof. That A-Pillar is the hardest part of your car and not a place safety regulators want a pedestrian’s head hitting.

Aerodynamics
A steeply raked, angular hood and sharp bumper are good for aerodynamics, right? We used to think so, but it turns out that drag, the force of a car resisting the wind as it pushes through air, doesn’t care much about the shape of the front of a car as long as there is not much front overall. That sounds a little weird, but engineers measure the “total frontal area” of the car. That area is what the wind sees, or you would see, if you looked straight at a car when standing directly in front. The new Mercedes CLA shown in the picture above in light silver has a very flat (up and down) front bumper and grill, and then a flat hood. The exact opposite of what we used to view as aerodynamic. Yet, as Mercedes explains in its information on the car “With a Cd figure of 0.23, the CLA sets a new benchmark among not only Mercedes models, but also all series-production vehicles. The frontal surface area, Cd x A - which is crucial to aerodynamic resistance – also leads the field at 5.49 sq. ft.” This is not a super-car, it is Mercedes Benz least expensive US offering and costs about $30,000.

The new 2014 Mazda 6 (also silver with yellow background), costs even less and has a similarly low Cd of 0.26. The reason again is low frontal area and attention to detail. It is important to package all of your parts into the smallest possible area as viewed from the front. Shape matters, but not nearly as much as keeping the area to the wind as small as practical.

Style
All of the new vehicles in these photos are from different manufacturers and are all from different continents in terms of design. However, as you can see, they all have the new flat front fascia and horizontal hood. It is not an accident. Design trends, like all things in this new modern world are accelerating. The time between a new design being introduced and it being copied, either purposefully or subconsciously, by the rest of the pack is now about 2 years.

Speaking about what Cadillac calls its brand’s “Art & Science” design philosophy on the new 2014 Cadillac, Bob Ferguson, vice president, Global Cadillac said, “The all-new 2014 Cadillac CTS sedan delivers crafted design, thrilling performance and sophisticated technology.” In an unrelated statement, Speaking at a design awards ceremony about Mazda’s “Soul of Motion” design language on the Mazda 6, former Torque News contributor and NEMPA president Keith Griffin said "The 2014 Mazda 6 is a stunning example of the real-world application of the 'Soul of Motion' design language. It was beautiful on the TAKERI concept and now is a stunning sedan that is turning heads around the world.” Both statements are true, and both apply to sedans from different continents, different companies, and different designers, yet both feature flat fronts and hoods you could set a table on.

The funniest part about this is new trend in car design is that the Mercedes SL cars from decades past all had flat fronts and horizontal hoods! At a recent Cars and Coffee hosted by a Massachusetts car dealer in the lot of a Mercedes dealership, one could see the SL design from the early years, square and flat, then the 1990s and 2000s, angular and steeply curved, and then back again to the flat front in the newest design.

You already know this new design trend because fashion is cyclical and nothing is new.