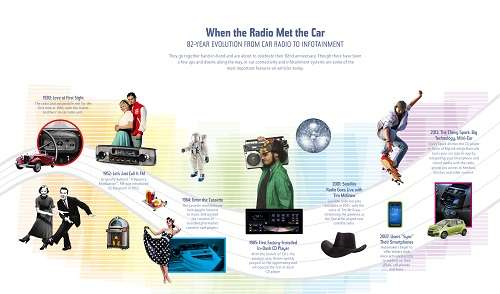 Ever since Nicola Tesla first demonstrated radio to an audience in 1893 the device was destined for use in the automobile. By 1930 the radio had evolved enough that the Galvin brothers first placed one into a car with commercial success. Radio became not only the delivery system for baseball games, music and programs, it was one of the main forms of communication in the United states. Presidents used regularly scheduled radio programs to deliver news and politics to Americans and through the Second World War was the main way Americans learned what happening in their world.

In one of two press releases today General Motors highlighted the milestones of in-car entertainment. In 1952 Blaupunk, who would later become famous in the US for radios in German cars, introduced FM radio and quality was vastly improved over AM. 8-tracks came next. The audiophiles of America and beyond became used to the format which allowed the huge luxury of not only listening to one’s choice of recording in the car, but could also magically switch the sides of the “Album” with the touch of a button. Cassettes followed and the “mix tape” was born. Billy Idol, Genesis and many other bands became available not only on albums, but mixed up on tapes either randomly or in themes one could make for themselves or give to a friend.

Soon the quality of recordings in cars took a huge leap forward. The CD was born and was a perfect match for in-car audio. GM reminds us it was about 1985 that in-dash CD players were first introduced. We all remember the hassle of the “Multi-disc” changer sitting in the trunk in about the worst possible place to mount something requiring constant changing. The first six discs loaded by many users were also the last and only to go into those. Although we stepped back to being able to primarily listen to albums again, the quality was leaps and bounds better. However, two guys in a garage in California had been working towards better ways to do all things digital. The second life of Apple brought the iPod and forever more CDs were nothing but a bother.

Satellite radio joined the fray in 2001 and would likely have faded away if not for one man and his sidekicks Robin and Babba Booie. IPod integration was a significant improvement over all of these technologies and without exception the automakers blew it. Not one could easily, effectively, and on every model offer a simple connection to the world’s favorite music device. Today the cord is gone, having been replaced with Bluetooth connectivity. In fact, more and more systems like GM’s MyLink are replacing in dash systems. One’s radio will become the main driver of the audio we enjoy in the car.

One can only hope the automakers will somehow be forced to even return to a standard opening in the dash so we can install any product we choose and finally be rid of systems that cost too much and do too little.