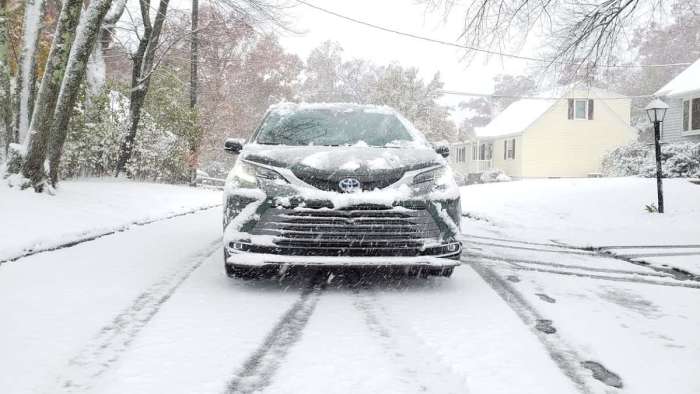 We are among the first in the nation to drive the all-new 2021 Toyota Sienna AWD minivan in the snow. How well does its unusual electric motor AWD system work?
Advertisement

Toyota's 2021 Sienna minivan is all-new this model year. It benefits from a new platform and with that comes Toyota's unusual all-wheel-drive (AWD) system. Instead of using a transfer case and a driveshaft to send power from the front to the rear, the Sienna, like the RAV4 Hybrid, RAV4 Prime, Venza, Highlander, and Prius, uses an electric motor in back to drive the rear wheels.

2021 Toyota Sienna Electric Motor AWD System
This system is much simpler, and we think lighter, than a conventional front-drive platform adapted to AWD. And the good news for new Sienna buyers is that it is not new to Toyota, just to this model. Toyota has been using this novel AWD system in the RAV4 Hybrid for two generations. We snow tested it years ago in the RAV4 Hybrid and were impressed with the results.

2021 Toyota Sienna - Power to Spare
The Sienna uses a hybrid powertrain with impressive torque and 245 hp to drive all four wheels. Two-wheel drive trims are also available. Here in New England, we love the idea of all-wheel drive in any vehicle. Particularly daily drivers and family vehicles we will use in all weather conditions.

2021 Toyota Sienna AWD - Perfect In The Real World
The Sienna is not a brute of a vehicle built for off-road adventures. If you want such a beast, Toyota has the 4Runner and Sequoia. Both the Highlander and RAV4 also trims better suited to off-road and extreme weather driving. Instead, the Sienna is designed for all-weather conditions on-road. And in our testing today, it proved to work flawlessly. 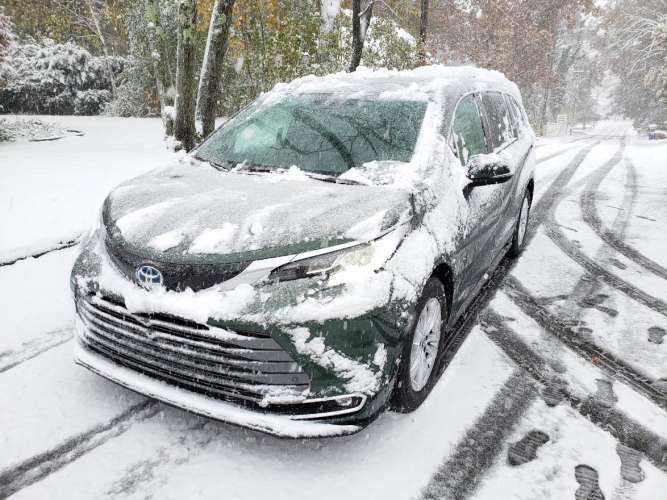 2021 Toyota Sienna AWD - Winter Testing Results
We only had about four inches of snow in which to test the Sienna, but that was enough to convince us that the AWD system works great. We tested the Sienna on hills both climbing and descending, and tried a variety of corners. We also moved it around an unplowed paved driveway to see how well it worked in reverse. In every test, the Sienna performed well. In case you were wondering (like we were), yes, Toyota confirms that the Sienna's all-wheel drive system does work in reverse.

The Sienna can overpower its front tires on slippery surfaces if you give it too much throttle. All-wheel drive vehicles can do that. However, if you use a soft toe on the throttle and also ECO mode, the Sienna barely lets a wheel slip. The traction control stays out of the party for the most part. This is exactly how we like our vehicles to perform in snowy and icy conditions. We despise traction control that cuts power and intervenes too soon. Toyota has a perfectly balanced all-weather drive system in this new Sienna. 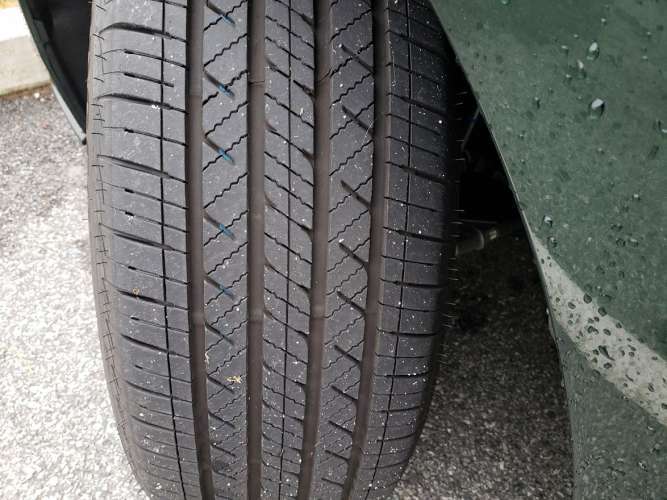 2021 Toyota Sienna - Tires
We also had a chance to test the Bridgestone Turanza tires our Limited trim was fitted with. As most drivers know, all-wheel drive does nothing to help you stop, and little to help you when turning in normal winter driving. Tires are really what is most important. Here Toyota again made the right move. We checked out the Turanza's rating on Tire Rack and found the tire has a rating of "Excellent" in snowy conditions.

Toyota paired proven all-weather tires with a modern AWD system to create a new Sienna that we think most family drivers will feel confident driving no matter the road conditions. Whether they be heading to the cabin in a storm, ski trips, hockey games, or any other winter-weather family adventure, the AWD Sienna is the perfect choice.

John Goreham is a long-time New England Motor Press Association member and recovering engineer. John has completed the Team O'Neil Rally School's Winter Safe Driving Program. Although he tests vehicles on snowy public roads, at no time does he put the public at risk. You can follow John on Twitter, and view his credentials at Linkedin

Ewald Radavich wrote on October 31, 2020 - 6:40pm Permalink
I had a 2004 sienna. I loved it but in the winter in the midwest the sliding side doors were a nightmare. Near or below freezing you couldn't open the sliding side doors to save your soul.
Paul Lemieux wrote on November 5, 2020 - 8:02am Permalink
In the 2021, you can remote start it from your keyfob or phone app. Give it 10 min to warm up and the sliding doors shouldn't be an issue.
Ray Orr wrote on November 14, 2020 - 6:52pm Permalink
We had an 04 Sienna AWD. Best vehicle we ever had. No problem at all with the sliding doors. Couldn't turn off the anti slip and hated that losing power half way up a snowy hill