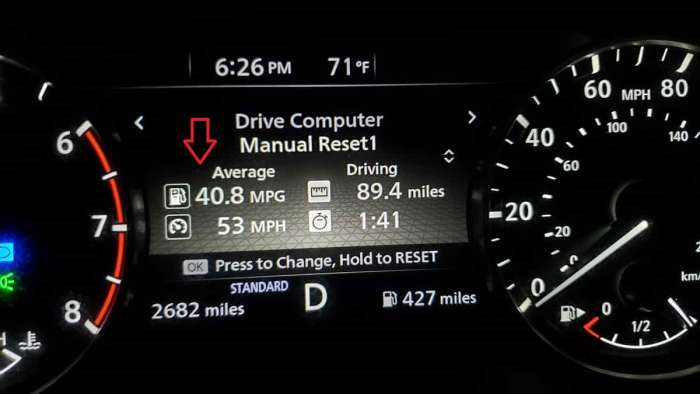 We explain why your digital miles per gallon display in your vehicle is not accurate.
Advertisement

Fuel economy displays in our vehicles offer a neat bit of information. Who doesn’t want to know how many miles per gallon they are getting? The problem is, these in-vehicle average MPG displays are almost always inaccurate. In almost all cases, we have found through testing that they are wildly optimistic. In other words, they are lying to you.

We’ve compared the average MPG displays in our test vehicles to the actual miles traveled per gallons consumed for years. Over hundreds of vehicles tested, we have only seen the display be accurate a handful of times. Most of the time, the MPG display you see in your dash display is telling you your mileage is about 10 to 15% better than it actually is.

In a 2016 Subaru Forester 2.5i Premium that I own, the display is almost always about 1 MPG, or about 3% high compared to what the vehicle actually achieves for MPG. It likes to tell me the vehicle has a 30 MPG average over a tank, but when I compare that using miles traveled to gallons consumed, it is almost always about 29 MPG. As MGP displays go, this is one of the more accurate ones we have seen.

In a test of an all-new 2021 model year crossover, we zeroed the average and the trip odometer and set out on our test. The MPG display had us preparing to write a story saying this vehicle is as efficient as a hybrid. However, when the MPG display went above 40 MPG, we started to wonder if it could possibly be correct. Over the full test, it settled in at 35.8 MPG. We traveled 241.6 miles using 7.43 gallons of fuel, so our true mileage was 32.5 MPG. That is a 10% difference, and typical in its optimism based on our testing.

One of the highest MPG scores we ever observed was in a test of diesel Volkswagen Golf. The in-dash display told us the average was 56 MPG. However, by our calculations dividing miles by gallons, we came up with 50.2 MPG, a 10% lower MPG. Still a high number, but why does the car have to exaggerate?

Interestingly, one of the rare examples of a vehicle displaying a lower than actual fuel economy was in the all-new Honda CR-V Hybrid. We recorded a 39.09375 MPG number during our time with the CR-V Hybrid. Let's just round that to 39.1 MPG. However, the dash displayed 36.3 MPG.

In our testing, we, of course, zero the MPG average using the infotainment settings, and we fill the tank to the first click and zero the trip odometer. Next, we drive for the majority of the tank. We like to see at least 250 miles of distance before we check mileage. We then re-fill to the first click and we record the gallons consumed. Try this in your own vehicle and tell us in the comments below how close to actual your in-dash MPG display is.