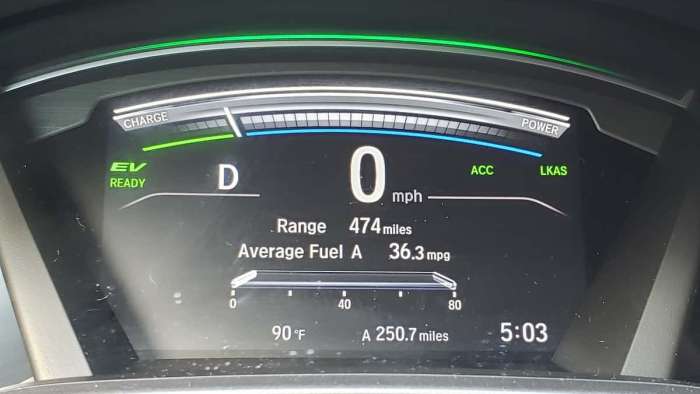 Own a Honda CR-V Hybrid? Your Mileage May Be Better Than You Think

In our testing the Honda CR-V's dash display of MPG was lower than the actual MPG - By a pretty meaningful amount.
Advertisement

Fans and owners of the Honda CR-V Hybrid AWD are attracted to the model because it is a green vehicle with outstanding fuel efficiency. There are only a handful of crossovers its size that can deliver the fuel economy the CR-V Hybrid does. Many owners of all vehicles like to trust the in-dash display showing the fuel economy of the vehicle. In our testing, the in-dash MPG display read 36.3. However, our more accurate miles per gallon calculation shows a much higher number.

Dash Displays Are Unreliable
We know from testing vehicles that in-dash displays are often very optimistic about the fuel economy the vehicle has achieved. These MPG averages per tank of fuel, or zeroed out when the driver wishes to re-start the MPG calculations generally run about 5% higher than the actual fuel efficiency of the trip or of the log being kept. We know this from testing hundreds of vehicles and checking the miles per gallon and then comparing it to the dash display.

Here's just one example. In 2014 we tested a VW Golf TDI (diesel). The in-dash display told us the MPG was 56 MPG. However, by our calculations dividing miles by gallons, we came up with 50.2 MPG. That is a 10% lower MPG than the car showed us.

How We Calculate Miles Per Gallon
The way we calculate MPG is this: We insert the fuel nozzle and fill the tank. When the nozzle clicks off, we do not add any more fuel. We then zero the trip odometer. Next, we record the miles we travel. FInally, we re-fill the tank the same way and we then divide the miles traveled by the gallons used. It's not rocket science. We should note, that this only has any real meaning when the vehicle is driven over a reasonable distance. In the case of the CR-V Hybrid AWD, we drove it 250.2 miles and we put in 6.4 gallons of gas. The image was taken across the parking lot from the pump. Which is why the odometer has an added 0.1 miles on it. 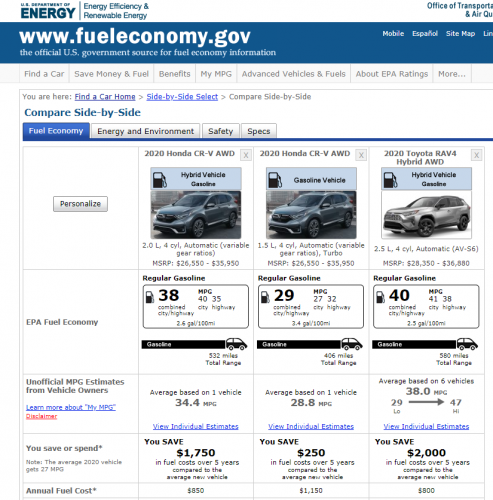 How Much Better Was the Mileage of the CR-V Hybrid?
We recorded a 39.09375 MPG number. Let's just round that to 39 MPG. This number is interesting to us for a few reasons. First, it is about 8% better than the car told us our MPG was. Second, it bumped our observed MPG to higher than the EPA estimates shown above. We only drove the CR-V Hybrid AWD on the highway and on some rural back roads. So, the CR-V Hybrid delivered better than promised MPG during our use of it. Which included constant AC usage due to high heat.

Summary- Kudos To Honda For Outstanding MPG
So congratulations to Honda for creating a great new green crossover for Honda fans and anyone who wants to drive green and still have all-wheel drive, great space, and an a very affordable price point. And if you own a CR-V Hybrid AWD, maybe you could compare your dash MPG to the MPG you get using our method at the pump. Just be sure to hit your trip odometer zero when you fill up the first time.

Charles pesce wrote on February 9, 2021 - 2:07pm Permalink
I have not been able to get 40miles in the city, I do live in the Northeast and the weather has been cold will this improve when the weather.gets warmer
sarad wrote on June 3, 2021 - 6:42pm Permalink
my honda crv 2021 hybrid is not giving me more than 29miles per gallon in higway.
William Phelps wrote on July 5, 2021 - 5:36pm Permalink
My MPG was between 29-33 until roughly 6300 miles. Over the last 700 miles I’m running 37.8, mostly hills and highway about 65 or lower. At above 65mph, MPG is 29-30.
Ray Richards wrote on June 19, 2021 - 6:33am Permalink
Had 2021 model since December. Done 3300 miles and mpg showing at 36 and still rising every significant journey I make. Have not zeroed at all but expect it to go higher over time.
Kyle Nowak wrote on February 5, 2022 - 10:02pm Permalink
Just bought my 2022 Hybrid today and the 110 mile trip from the dealer saw: 70 miles @ 75mph = 22 MPG 30 miles @ 65mph = 24 MPG 10 miles @ 55mph = 25 MPG First drive. Break in period is real. Was driving into a slight head wind but those numbers are seriously disappointing. Even if 10% off. I was not hooning it either. Cruise set for most of it. I then went and did a 30 mile city loop that had roads from anywhere with 50mph speed limits to 25mph roads with numerous stop signs and lights. I turned in a much more respectable 35.6, but still disappointingly off the 40mpg city rating. If the onboard computer is under-reporting my figures by 8% (and I sure hope it is with those putrid highway figures) that would put my city driving at a 38.45mpg - very acceptable. Since the dealer filled the tank I couldn't start my hand calculations to have total confidence so I will top off tomorrow and begin comparisons. Had already planned to.
Deborah Storm wrote on March 14, 2022 - 3:23am Permalink
I’m very disappointed in my 2021 Honda CRV hybrid I am only averaging 33 MPG and it said I would get 38 Highway and 40 city I live rurally and drive many highway miles and only get 33 I’m angry about this! I bought it for the gas mileage and would have bought something else having known this
William Bryant wrote on April 4, 2022 - 1:23pm Permalink
2020 CRV Hybrid. If I stay in town for a month the milage will advance to 40.6 mpg. A 150 mile trip on interstate will decrease to 39.4 mpg. If I take another 150 mile trip the milage will decrease to 38.1 mpg. It is Florida if that lakes a difference.