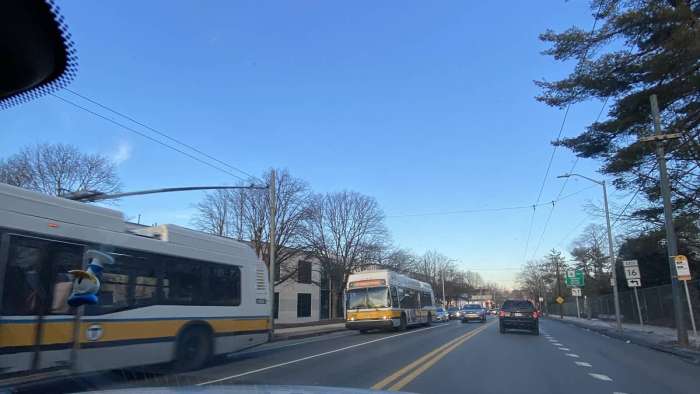 The Mass. Bay Transportation Authority has killed off the remaining electric buses the state had operated for most of a century and replaced them with ones that use diesel fuel.
Advertisement

After nearly a century of operating zero local emissions electric buses, the Massachusetts Bay Transportation Authority (MBTA) has finally eliminated the last of these electric buses and replaced them with ones powered by diesel fuel. The last electric buses operated by the Boston-centric transit system made their final runs Saturday, March 12, 2022.

The state had operated electric buses since 1936. At one point, the Boston-area system had over 450 electric buses in operation. The last lines operated on the Cambridge side of the Charles River, and 28 electric buses served the area near Harvard University. “I want to express my gratitude to our partners in Cambridge and Watertown for coordinating with the MBTA on these complex projects,” said MBTA General Manager Steve Poftak.

The electric buses, often called trolleybuses, didn’t need expensive batteries that use rare earth metals mined in areas without environmental controls or worker protections. Rather, they operated using suspended overhead wires to power the simple and reliable electric motors directly. The MBTA has been steadily eliminating the electric bus routes for decades. The reasons the MBTA lists for finally ridding itself of the electric bus lines include:
-The construction of separate bike lanes on the routes
-The construction of dedicated bus lanes
-Making streets safer and more inviting for pedestrians
-Removing the bus power lines to facilitate transit priority infrastructure
-More equitable distribution of bus resources
-Reduced service disruptions from electric bus service line failures (related to the old power lines)

For the time being, the MBTA will use modern diesel-powered buses along the lines previously served by electric buses. The transit authority plans to someday replace those fossil-fuel-burning buses with battery-electric buses. The hope is for those to begin service in about two years. However, with a global shortage of electric vehicle battery capacity, a global semiconductor component crisis, and other vehicle parts shortages, Torque News suspects that the timeline may stretch.

When the new battery-electric buses the MBTA has eyed for the routes are in service they will still burn diesel fuel to make heat for the bus cabin in winter. The new charging facility being constructed for the battery electric vehicles includes a diesel fuel storage tank to top off the diesel consumed by the battery-electric buses. The MBTA says, “While current battery technology requires secondary diesel heating system on coldest days, emissions are still reduced by more than 90%.” Presumably, that reduction is in comparison to its fleet of fossil-fuel-powered buses, not the zero-local emissions trolleybuses.

Torque News interviewed two Boston-area residents familiar with the trolleybuses and asked them what they thought of the MBTA eliminating electric buses and replacing them with diesel buses. Klaudia Hunter said, “That’s really sad. I thought they were charming. I’m from Poland, and the electric buses reminded me of the ones that we have there.” Hande Tuncer offered similar thoughts, saying, “Why wouldn’t they coordinate the replacement with the new battery-powered buses if it’s just a couple year gap? Why is Boston only now getting new electric buses? Turkey builds its own electric buses.” Ms. Tuncer is correct, and in fact, Turkey makes driverless electric buses.

The reason that the MBTA is making this latest move to eliminate its battery-electric buses relates directly to a five-year project to reconstruct the streets and sidewalks in the Boston area towns they were serving. However, the MBTA’s reliance on the flexibility and simplicity of diesel fuel-powered transportation goes well beyond just its bus lines. Nearly all the commuter rail lines the state operates use diesel fuel.

Aside from the benefits that we mentioned above, the reconstructed streets won’t have the visual reminder of the zero local emission buses the MBTA eliminated. The MBTA offered the above comparison rendering of the skyline. As you can see, the view does improve significantly in some spots where the lines intersect. Use our top-of-page image for a second look at the way the lines appear along most of the routes.

During a public comment session shown in the video above, residents of the areas served by the MBTA had hard questions for the MBTA related to its decision to eliminate the existing electric trolleybuses. One well-spoken resident, 13-year old Omriqui Thomas, brought up the issue of child labor in the mining and production of batteries for electric vehicles. She also offered that the production of electric batteries for electric buses is “extremely harmful to the environment.” She touched on the fact that modern battery-electric buses rely on diesel heaters on cold days. She made the point that the outgoing electric trolleybuses are a proven reliable, sustainable form of zero-local emissions transportation and she contrasted that with what she sees as the perils of battery-electric buses. Her summary of the MBTA’s plan was that it is “environmentally backstepping.” You can hear her interesting questions and points at timestamp 1:15.

The MBTA’s Scott Hamwey answered Ms. Thomas's question by pointing to the MBTA’s overall plan to decarbonize its service and said that its plans are in line with national standards for moving to battery-electric buses.

Torque News wishes to acknowledge that the MBTA was responsive and helpful and provided images, facts, and source links for this story.

Top of page image courtesy of Boston-area resident Melike Uzun. Before and after skyline rendering courtesy of the MBTA.

Jane Goreham wrote on March 18, 2022 - 3:27pm Permalink
Ms. Tuncer and Ms. Thomas make good points! I took those electric buses every day for 4 years to get to high school.
HW wrote on March 20, 2022 - 9:01pm Permalink
The T has been waiting for a good excuse to get rid of the trackless trolleys and all the street reconstruction about to happen helped them to convince local officials. The trackless are near or at end of their service life, another good excuse to remove the wires instead of getting new trackless. The 2 year trackless replacements are diesel-hybrids. The T has found with the few battery electric buses it has, winter range is significantly reduced, therefore the diesel heaters to reduce battery drainage.