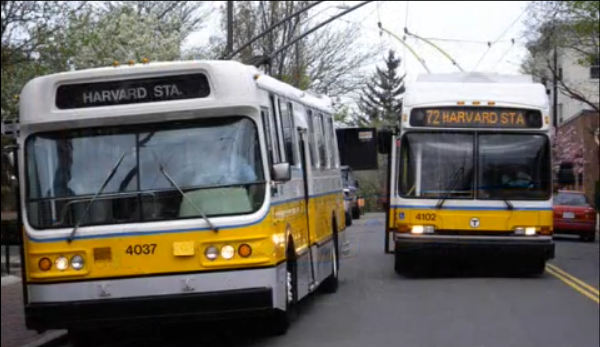 Electric buses are a great idea, but let’s not fool ourselves about how far we’ve come.
Advertisement

Electric buses are the all rage these days. The electric vehicle (EV) movement is now in full swing. Technology is advancing slowly, but steadily, and rapid charging electric buses (EBs) are soon to enter service. The battery problem that is still holding back widespread adoption of affordable electric cars may be less problematic in larger vehicles that return frequently to a main hub. The funny thing about this new wave of buses is that when I was a child there were electric buses everywhere I looked and batteries were not a problem at all, because they didn’t use any.

One of my earliest childhood memories is standing with my mom outside a supermarket in the Boston metro area. I suspect it was the Mount Auburn Star Market (in Cambridge, MA). A bus was stopped and she says something like “Now watch what the man does.” A bus driver gets out of the bus, retrieves a very long stick and then uses it to put the bus’s connection rail back on the power rail that runs above the street. (See buses in the photo). Those EBs ran on every major street in my area in back then. This was not unique to my hometown. The internet is full of video of old EBs all over the world going back almost a century.

This memory of mine is likely from the very early ‘70s. I am now 46. The electric buses are gone in Boston, Cambridge and the surrounding areas, though some trolleys and subway trains do use electric power. Those zero emissions buses were all replaced first by diesel buses. The buses we use now converted to natural gas about 10 years back, trading one hydrocarbon for another. Everyone was so proud of the environmental advance. I remember the ribbon cutting ceremony. Folks now live as far away from the city as they can afford to. The diesel commuter rail trains that feed the cities are empty half the time since everyone wants to commute the same way at the same time of course. There is a plan to expand the diesel, always half-empty, commuter rail system dramatically, even to Cape Cod.

Those old electric buses were running with zero tailpipe emissions in the days when cars had exhaust emissions 3 to 5 orders of magnitude greater than those today, which can now hardly even be measured by conventional methods, hence the name “partial zero emissions vehicle” or P-ZEV. Back then the unburned hydrocarbons exiting our cars’ tailpipes (this being pre-catalyst and pre- exhaust gas recirculation) had a nice flavoring of tetraethyl lead. The fun thing about tetraethyl lead is that it never leaves. Once you put it into your environment it is the gift that keeps on giving. Yet, in the midst of all this air pollution nuttiness, the city buses were all running on electrons. Let’s pretend the powerplants back then weren’t all actually powered by coal.

Overall, about a quarter of the energy now produced in Mass. is from coal, but only 5% of the electric grid south of Boston where I live is powered by coal because much of it goes to neighboring states. In an amusing twist 7% is actually oil, and total hydrocarbon sources for electricity are 48% of what is in the grid. The next biggest contributor is nuclear power at 27%. That low carbon electricity source will never increase, because the environmental lobby is successfully keeping any new nuclear power from being added, and is close to eliminating Pilgrim and VT Yankee, both older nuke plants waaay past their original design lives. The no-nukes folks were also successful in keeping Seabrook from building out its second reactor (this was a while ago). If we had that, maybe we wouldn’t need the oil and coal. I’m really not sure.

According to National Grid’s cool information sheet it sent me with my bill in Plainville, MA solar is 0% of the system power in my area and wind is a close second with 0%. It’s hard to believe because solar arrays are everywhere. A footnote in the bill that says “Electricity customers in New England are served by an integrated power grid, not particular generating units.” So one can pay more for the clean electrons if one feels better doing so, but it just makes the dirty electricity cheaper for the neighbors. Here in Southeastern MA, we almost got a big clean energy boost from Cape Wind, but that was fought by not just the environmental lobby and the politicians that supported environmental issues (like the famous Ted Kennedy), but by pretty much everyone else.

I’m happy to see electric buses being reintroduced. To me they make the most sense of all EVs today, just as they did 40 years ago when they were everywhere one looked.

Still image and video courtesy of Youtube.com and bradlee91192

oakland raiders... wrote on October 7, 2014 - 5:46pm Permalink
Hello there! Would you mind if I share your blog with my twitter group? There's a lot of folks that I think would really enjoy your content. Please let me know. Thanks
this site wrote on May 9, 2017 - 11:55am Permalink
rPgoH8 pretty beneficial stuff, overall I believe this is well worth a bookmark, thanks