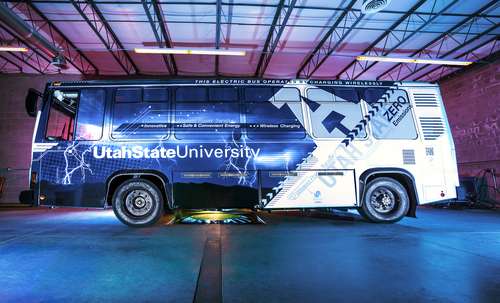 Wireless recharging of electric vehicles has taken a step closer to reality with an all electric 40 foot transit bus being that was demonstrated on Thursday by researchers at Utah State University. The wireless electric vehicle recharging technology was developed by USU's Wireless Power Transfer team, and is being commercialized by WAVE, Inc, a spin-off company from USU.

The team has worked on the technology for some time, and July 2011 demonstrated 90 percent electrical transfer efficiency of five kilowatts over an air gap of 10 inches. This is high enough a charge rate for a 4-5 hour recharge time on the electric cars currently on the market. This week's demonstration showed a significant improvement: A power level up to 25 kilowatts, greater than 90 percent efficiency from the power grid to the battery and a maximum misalignment of up to six inches.

WAVE, in partnership with the Utah Transit Authority, will launch a commercial demonstration project in mid-2013 on the University of Utah’s campus. It will feature a 40-foot transit bus on a public transit route and an increase in wireless power transfer charging from 25 kilowatts to 50 kilowatts.

The high recharge rate means an electric transit bus could cover a longer route with a smaller battery pack. Why? It's because the effective daily driving distance of an electric vehicle is much greater if that vehicle has a fast recharge rate.

“Current battery limitations prevent an all-electric transit bus from operating all day from an overnight charge,” said Wesley Smith, CEO of WAVE. “WAVE solves that problem by charging the bus wirelessly during its daily operations when the bus stops to load and off-load passengers. This technology makes electric buses competitive with their diesel hybrid and CNG counterparts.”

The reasoning is similar to that of Momentum Dynamics who is also targeting wireless charging for transit buses. A shuttle bus or transit bus follows a fixed route every day, making stops at fixed locations. If wireless charging pads are distributed around the bus route, the bus can be automatically charged wirelessly at each stop along the route. So long as system is designed to automatically kick in as soon as the bus stops over the wireless charging pad, the bus driver can focus on their job of loading and offloading passengers, while the bus focuses on picking up a charge.

Experienced electric vehicle drivers often puzzle and scratch their heads over the "inconvenience" of plugging in and recharging their car. Plugging in an electric car is no more inconvenient than plugging in a cell phone for recharging. However there are scenarios where wireless recharging makes a vast difference. As we just noted, transit bus or shuttle bus drivers have a duty to first tend to their passengers and plugging in to recharge at every stop simply would not work out well. Another scenario is car sharing operations with electric cars in the fleet, and the members who aren't very savvy on electric cars.

“The unveiling of the Aggie Bus today is a historic achievement and a great leap forward in the science and engineering related to electric vehicles,” said Robert T. Behunin, USU vice president of commercialization and regional development. “As a result of the work done by Utah State engineers, scientists and partners, EV owners and operators will now be able to simply drive over a pad in the ground to recharge their batteries, the benefits of which reach far beyond convenience.”