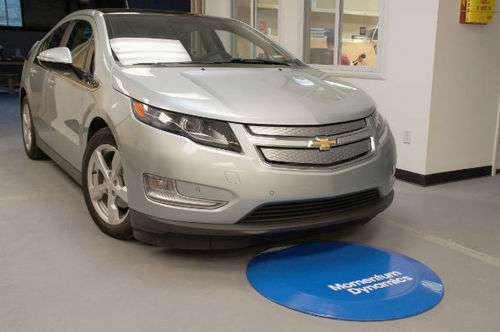 Momentum Dynamics is demonstrating a wireless electric car charging solution, on a modified Chevy Volt, and promises a higher powered system that could allow vehicles like airport shuttle buses to run 24/7 while never stopping to recharge.
Advertisement

What if an electric truck, like airport shuttle buses, could run 24/7 by charging a bit every time they stop? According to Momentum Dynamics, developer of a wireless electric car charging system, the company's charging system could mean an all electric airport shuttle bus that can run 24 hours a day, without requiring a long recharging stop, instead staying on the road the whole day picking up and dropping off passengers. To demonstrate the system, the company has outfitted a Chevy Volt with their wireless charging system, to demonstrate wireless charging in operation at this weeks Commercial Vehicle Megatrends USA 2012 conference in Dearborn, MI.

The system works via "closely‐coupled magnetic resonance." That means there are two wire coils, one coil is embedded in a pad on the ground, and the other is located in the car or truck. Electricity is transmitted from one coil to the other, with no wired connection. The two coils are tuned to a specific frequency for optimum energy transfer. To start charging a vehicle equipped with the technology, one simply parks on top of a charging pad, and the Momentum Dynamics system immediately starts a charging session, with no need to plug in to a charging cable.

According to Momentum Dynamics, the system is 91% efficient, versus 96% efficiency in wired electric car charging, and there is no measured heating in the vehicle.

The driver of a vehicle equipped with the Momentum Dynamics system need only park close to "on-target" with the charging pad. A box inside the vehicle emits audible chirps to help with positioning the vehicle over the pad, and there is no need to be ultra-precise. The vehicle starts charging immediately, making it much simpler in operation than wired electric car charging systems.

The current system handles charge rates up to 10 kilowatts, and higher powered systems are under development for a 30 kilowatt, 60 kilowatt and even 100 kilowatt charge rates. The electric cars currently on the market support either a 3.3 kilowatt or 6.6 kilowatt charge rate, resulting in the many hours-long charging times. The on-board charger is a bottleneck that the Momentum Dynamics system does not bypass, and the Chevy Volt the company is demoing takes just as long to charge as a regular Volt.

For demonstration purposes, Momentum Dynamics is working on modifying the Volt's T18 Battery Control Module to allow a higher charge rate, aiming for a 1 hour recharge, or 1/3rd the time required with the Volt's current charger.

The company's sights are set on the commercial fleet market, however. It's that market where the company is targeting the higher powered charging solution, with a 30 kilowatt system targeted at medium-duty electric trucks, and 60-100 kilowatt systems targeted at heavy duty electric trucks. There are many trucks and buses driving along fixed routes every day, all day long, making short stops along those routes. The best example are those shuttle buses ferrying people around airports, but there are similar scenarios in many other settings such as campuses or city bus routes.

Several manufacturers are building all electric shuttle buses today. The problem for a fleet owner is to keep those buses on the road rather than in the depot plugged in to a charging station. The typical shuttle bus driver is focused on the passengers, and on keeping to the bus schedule, and would not appreciate an extra step of plugging in a charging cord at every stop. However, if a wireless charging pad were located at every stop all the bus driver need do is park over the pad, then get to the task of loading and unloading passengers. During those few minutes the shuttle bus picks up a bit of a charge, with almost no effort on the bus drivers' part. Depending on the charge rate, and Momentum Dynamics is targeting 10-30 kilowatt systems for light-to-medium duty trucks, that "bit of a charge" could be pretty significant.

The company is currently working on beginning fleet pilot programs around the country with delivery companies like FedEx and UPS, as well as shuttle services and other potential customers. It may be introduced as an aftermarket consumer product as soon as 2013, to retrofit the system into electric cars.

While this is well and good, it does introduce a wrinkle in the electric car charging market. A lot of effort was expended in deciding to implement wired charging systems, through the J1772 charging standard and the plug that is available on all electric cars today. That effort has made the J1772 plug a common standard any vehicle or charging station manufacturer can implement, which is leading to a broad deployment of J1772 based charging stations. Wireless charging vendors, like Momentum Dynamics, while well intentioned, sometimes presenting interesting scenarios where wireless charging is a great solution, have the potential to fragment the methods used for electric vehicle charging. There are several wireless charging vendors, with incompatible systems, all saying theirs is the best. It would throw electric vehicle adoption back into the stone ages if a standardized charging standard were dumped in favor of a dozen incompatible wireless charging solutions.

Pitching this solution for commercial fleet use, as Momentum Dynamics did this week at the Commercial Vehicle Megatrends conference, makes a lot of sense. Fleets often employ customized solutions and vehicles, making a non-standard charging system par for the course for a fleet operator. It's when one talks about the general public adopting this technology, that's where the focus should remain on standardized charging systems, so that an electric car owner can drive up to any charging station and charge without worry.

The company has identified a scenario where wireless charging systems may be the best solution, and enables electric trucks and buses to operate a day-long schedule. Several pilot projects are underway in California, Pennsylvania and Germany to test the system in use. The concept is similar to the wireless charging pads now available for mobile electronics devices, but the power level is much much higher. The company does all design and manufacturing in the U.S. and intends to never outsource to other countries.

Volt Owner wrote on June 16, 2012 - 12:38pm Permalink
I own a volt and am fine with charging on the 110 volt charger overnight. I love this idea! It would be great for public parking so you don't have to worry about the charge cable being stolen or vandalized. Also, it would be handy for street level parking. These cars are the start of an e-revolution, and are a way to wean us from imported oil. I love the idea of mulitple fuel options (Hydro,solar,natural gas,coal) & gasoline when needed. This idea will help people become more comfortable with electric driving. =-=-=American made, American fueled! =-=-=.
Nick wrote on June 16, 2012 - 3:39pm Permalink
I think the potential of wireless charging is to have as many as possible in many location as you could fit in. Then it would be easy to extend the range of EVs. It also makes a lot of sense for EV racing, making endurance a reality. Plus, how convenient is it to have a little pad under a car recharging it in your garage? Makes perfect sense.

Tesla-Funded Research Reveals One of The Biggest Mysteries of EV Battery
Tesla Tesla Buyer Nets a Whopping $12,000 Discount After Asking for Reduction
END_OF_DOCUMENT_TOKEN_TO_BE_REPLACED