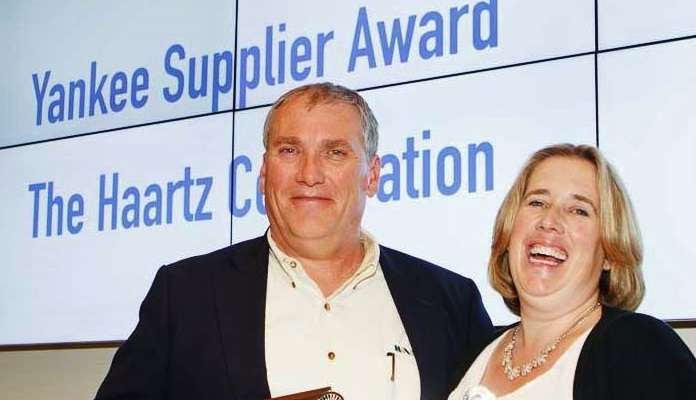 Automotive supplier Haartz Corporation took home the top supplier award this year at the New England Motor Press Association's annual conference at the Massachusetts Institute of Technology. It's about time. Haartz has been in business and in New England since 1907!

If you have a soft-top convertible you may know of Haartz, but whatever vehicle you own, Haartz fabrics, systems, and components most likely are in it. Haartz tops cover cars like the Mazda Miata and Fiat 124 Spider, along with most convertibles in the market. However, Haartz Corporation also produces many of the hand-wraps, moldable skins and artificial leather components now found on upscale luxury vehicles.

During the ceremonies that evening, automotive distribution icon Herb Chambers was presented with a lifetime achievement award. He had never met the people from Haartz despite both being leaders in the automotive business. During Mr. Chambers' acceptance speech, he took the time to tell a short story about how he had recently told a fellow collector of rare automobiles that he should switch the inferior top on his million-dollar collectible to a Haartz top like he himself had done.

Accepting the award from NEMPA's Vice President, Nicole Wakelin, was Doug Haartz. Doug is active in his support of the motor press and well known to the manufacturers who were on hand to bring home hardware of their own.

Although a global leader in automotive soft trims, Haartz Corporation has been family owned since 1922 and continues to design and manufacture its products where the American textile industry started, in Acton, Massachusetts. Haartz also has offices in China, India, Japan, and Europe.