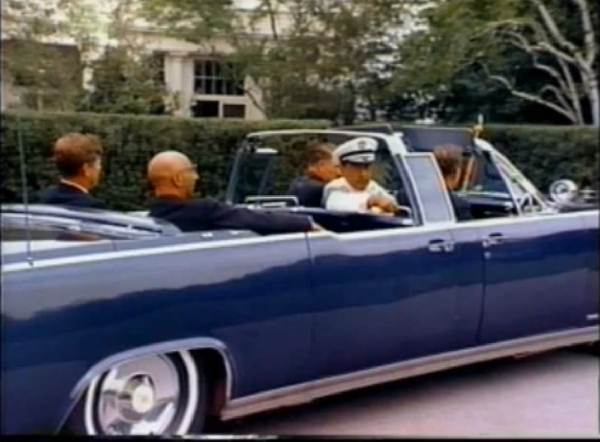 On a fateful day 50 years ago this November 22nd the world was forever changed. The car that played a role in that event is extremely interesting.
Advertisement

As we remember the assassination of President Kennedy on its 50th anniversary we thought it would be interesting to look back at the 1961 Lincoln limousine he was riding in that fateful day. Better writers than me will commemorate the man and there will be no shortage of stories in the news about JFK. The car we all think of from the famous films has some very interesting facts you probably didn’t know about. Here are just a few of the most interesting.

The Limo Was Blue, Not Black
Unlike all previous and all former presidential limos, JFK asked that the car be painted blue. It had been delivered black from the factory. The famous films are black and white and almost everyone thinks the car was black. Originally Kennedy had it painted midnight blue. Later it was repainted again this time a darker blue. After public appearances the car was often repainted because the crowd would damage the vehicle. It ended up being black after Kennedy’s administration.

The Limo Had A Hard Top
The Limo was not actually a full convertible, but rather a targa. A targa has a structural element that goes over the top like the handle of a basket to provide rigidity. The car also had a 6-segment bubble top roof made of clear Plexiglas. The clear Plexiglas was not bullet resistant and would probably not have made a difference that fateful day. There was also a vinyl cover that could go over the Plexiglas. That cover would almost certainly have made the sniper’s (or snipers’) job much more difficult. The bubble top was stored in the trunk of the car and that is why the “Continental kit” spare tire was on the rear bumper.

The Car Did Not Leave Service After the Tragedy
A president needs a car. This one was heavily modified and would have cost about a million dollars to build in today’s dollars. Therefore the car was immediately returned to service. First it was of course converted to a true hard-top design. It had a form of run flat tires added and some limited bullet-proof armor added, but it was not at all like the armored cars the president rides in today. After Kennedy the car served Johnson, Ford, and Carter.

It Might Have Saved Reagan from Being Shot
The car that Ronald Reagan was entering as he was shot was not the same car Kennedy was killed in, but rather a 1972 Lincoln. It had more bullet proof elements including better glass and door hardening. Interestingly, the older limo did not have this level or type of shielding. Reagan was actually not shot directly. He was hit by a bullet that first struck the open door of the limo he was entering. Had he been instead entering the older Kennedy limo design, that bullet would perhaps have gone through or into the car’s older armor, rather than bouncing directly off and entering President Reagan under the arm.

President Kennedy Had Other Lincoln Convertibles
There were two limos used in public. They were nicknamed the Queen Mary 1 and 2. The official name of the Kennedy limo was SS-100-X. However the president had other Lincoln convertibles he used for non-public travel. The red on shown and the blue on with no targa are two examples.

Do you know other interesting facts about the SS-100-X? There are many more not mentioned here. Feel free to add yours below, or to correct any inaccuracies I might have reported.

John Tapp wrote on March 2, 2016 - 10:40pm Permalink
The tires were actually a rubber-coated aluminum. The windshield was 8 panes thick. There was 1600 pounds of steel plating and 1500 pounds of glass put in. The brain and blood-spattered interior was completely removed and an all-new interior was installed. A bigger 462 engine was installed. The color was changed from blue to black. The car was retired in 1978 and was seen at the Henry Ford Museum.
Julie Holcomb wrote on June 16, 2017 - 11:47pm Permalink
Were there jumpseats in the limo in which kennedy was assas?
Robert Lane wrote on August 15, 2018 - 2:49am Permalink
The jump seats are located where Kennedy stands in the picture above your question. There is a really good article which shows better pictures. Google The New Your Daily News 50 years rare photos President John F Kennedy limousine gallery . If you can't locate email me just reply to this comment and I will send you a link. Take Care
Will Greer wrote on February 22, 2020 - 12:28pm Permalink
"The brain and blood-spattered interior was completely removed and an all-new interior was installed." Where did the removed interior elements go to? Were there pictures taken? Did any of the workers ever discuss what they saw?
Howard Linscott wrote on April 21, 2021 - 5:52pm Permalink
The first photos of the car show wheel discs from a 1957 Continental Mark II. All photos of the car in service show wheel discs from a 1957 Lincoln. It never had the wheel discs standard on 1961-63 Lincoln Continentals. Does anyone know why? Modern repros of the car can be spotted by their different doors. The original had a 12-inch extension between the doors, and a rear door at least 4-inches longer than stock (plus a roughly 15-inch extended rear fender). The Repro(s) have stock front and rear doors, but a much longer extension between the doors. Also I have noticed that, on the day of the assassination, the right rear door was never fully closed. Governor Connally would have entered after the president because he was riding in the jump seat, and apparently didn't pull the door hard enough to fully latch. The Secret Service should have caught that.

Tesla Contemplates A New Strategy for China Retail even As Sales Boom
Jay Leno on Elon Musk & EVs: “I Think He Should Get ... Credit"
END_OF_DOCUMENT_TOKEN_TO_BE_REPLACED