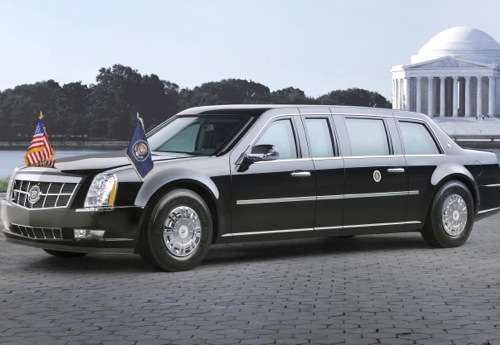 Top 10 Tales of Cadillac and the Commander in Chief

Just in time for the Presidents’ Day Holiday Weekend, Cadillac has released its Top 10 Tales of Cadillac and the presidents they have ferried safely in their commander-in-chief travels.
Advertisement

Cadillac has been bringing presidents in comfort from the White House since apparently 1919 when Woodrow Wilson rode in one for a World War I victory parade. (A little different from George W. Bush landing on an aircraft carrier and proclaiming “Mission Accomplished.”

Speaking of President Bush, even though he bailed out GM (and Cadillac) his two Cadillac limos (one a 2001 Cadillac DeVille and the other a 2005 Cadillac DTS) were not among the top 10 tales. Apparently, his presidential rides were not significant enough in their tenure.

By the way, it appears that presidents Nixon, Ford and Carter used Lincolns. Not for nothing but we know how those presidencies all turned out.

As presented by the automaker, here are 10 tales of Cadillac and the Commander in Chief.
1. President Woodrow Wilson rode in a Series 53, 1916 Cadillac through the streets of Boston during a World War I victory parade in 1919. Cadillac models were used during the war in Europe due to the power and durability of the engines, the first mass-produced V8s.

2. A lavish 1928 Cadillac Series 341 town car was used late in the Calvin Coolidge administration. The Series 341 was new for 1928 and featured a 90 horsepower V-8 with a smooth dual plane crankshaft, 3-speed manual transmission and tiltable beam headlamps. Fit for the President of the United States, the 1928 Cadillac embodied master craftsmanship and artistry.

3. After the attack on Pearl Harbor, legend has it that President Franklin D. Roosevelt used a heavily armored 1928 Cadillac Town Sedan that was originally owned by gangster Al Capone.

4. In 1938, two Cadillac convertibles, dubbed the "Queen Mary" and "Queen Elizabeth," were delivered to the U.S. government. Named after the great ocean liners of the time, the vehicles were 21.5 feet long, weighed 7,660 pounds each and were equipped with a small arsenal, two-way radios and heavy-duty generators. Durable and reliable, the two "Queens" served Presidents Franklin D. Roosevelt, Harry S. Truman and Dwight D. Eisenhower.

5. President Eisenhower, a noted car enthusiast, rode in one of the first Cadillac Eldorado models ever produced during his 1953 inaugural parade. The Eldorado represented a high point in automobile design history, as it had the first wraparound windshield, a feature quickly adopted on other production models.

6. In 1956, the Queen Mary II and Queen Elizabeth II convertibles replaced the original series, to serve President Eisenhower, and continuing to serve Presidents John F. Kennedy and Lyndon B. Johnson. Both vehicles were retired in 1968.
(Editor’s note: unfortunately we know the historical significance of the convertible limousine with regard to JFK’s assassination – the only president to be killed in a motorcade).

7. The Ronald W. Reagan administration took delivery of a 1983 Cadillac Fleetwood limousine and a Cadillac Fleetwood Brougham. It is often stated that the real Presidential Cadillac Fleetwood limousine was used in the 1993 film In The Line of Fire, starring Clint Eastwood, but in fact it was a carefully constructed replica and not the precise car that the Presidents used in that era. For security reasons, Presidential vehicles are no longer used outside of their official duties.
(Editor’s note: Apparently the last presidential limousines to be sold outside of government service were those used by LBJ. A Middleborough, Mass., business owner has one in the basement of his building that is stunning – and has been pressed into service for the occasional wedding.)

8. The Cadillac that debuted for service during the William J. Clinton administration in 1993 marked a new era. Up to this point, Presidential vehicles typically were production cars modified by limousine companies. The 1993 Presidential Brougham was designed, developed and built by Cadillac in a secure process that continues today, with presidential vehicles built in private to exhaustive specifications.

10. Today’s Cadillac Presidential Limousine debuted in front of a massive worldwide audience during President Obama’s inaugural parade on Jan. 20, 2009. Sometimes nicknamed “Cadillac One” after the nomenclature for Presidential aircraft, the current limo incorporates signature design and technical elements from Cadillac production cars but is exclusively built for its mission.

The car’s specifications are known only to the small team that designed it. The most visible difference is a more upright stance than predecessors, for improved outward visibility.

Not surprisingly these top 10 tales of Cadillacs and commanders-in-chief aren’t particularly titillating but they are still fun to read.