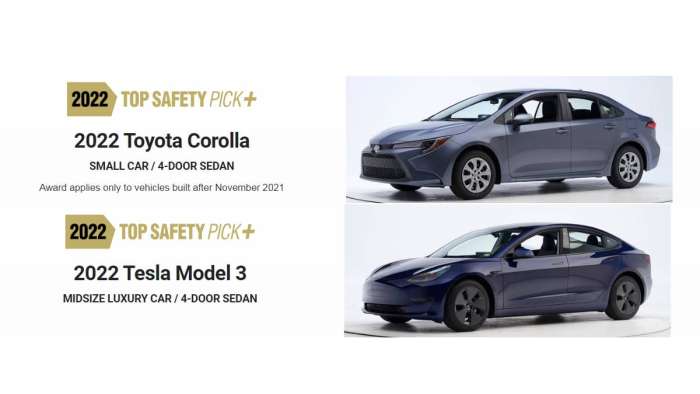 The 2022 Toyota Corolla has earned the Insurance Institute For Highway Safety’s highest possible rating, the TOP SAFETY PICK+. The democratization of vehicle safety continues. This rating is the same one that the Tesla Model 3, costing up to triple what the Corolla does, has earned.

Like the Tesla Model 3, the Toyota Corolla has earned the highest rating of “Good” on every crash test conducted by IIHS. In addition, the Corolla earns a score of “Superior” in both the vehicle-to-vehicle and vehicle-to-pedestrian active accident avoidance evaluations. Child seat anchors are also rated by IIHS and the Corolla scored higher than the Tesla Model 3 in that regard.

The Toyota Corolla is offered in both sedan and hatchback body styles. The new TOP SAFETY PICK+ applies to all new Corolla vehicles. The changes that resulted in this higher rating from IIHS are present on vehicles built after November 2021, when Toyota made improvements to the headlight system.

The Toyota Corolla is one of America’s top-selling vehicles. It ranges in price from about $22,000 to just under $30K for the top XSE Apex Edition. The Corolla Hybrid trim earns EPA estimated MPG ratings as high as 53 MPG City. Unusual for any automobile today, Toyota still offers the Corolla with a stick shift on a few trims for those who like to select their own gears. Check out our review this week of the 2022 Toyota Corolla SE M/T for our first-hand impressions.