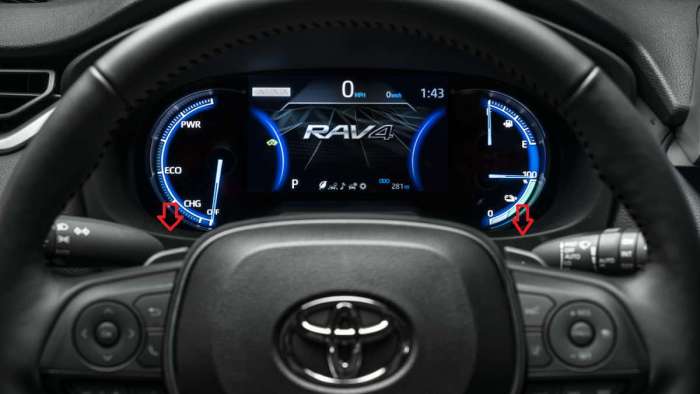 2021 Toyota RAV4 Prime: Explaining The Paddles On the Steering Wheel

The 2021 Toyota RAV4 Prime plug-in hybrid-electric vehicle has paddle shifters on the steering wheel. Here’s what they do, and more importantly, don’t do.
Advertisement

If you are a green vehicle techie like this writer, you are excited about the all-new 2021 RAV4 Prime plug-in hybrid-electric vehicle (PHEV). The RAV4 Prime is fantastic to drive, safe, and perfectly-sized to hit the heart of the market. The RAV4 Prime has a modern design that rivals electric vehicles for ease of maintenance and promises a very low cost for repairs. And it just so happens to offer 94 MPGe and an all-electric range of 42 miles. But, what do the paddle shifters do?

RAV4 Prime Paddle Shifters - What They Don’t Do
Sadly, we must report that the RAV4 Prime’s paddle shifters do not allow the driver to manually control the regenerative braking force. Some green vehicles allow the driver to take an active role in the regenerative braking force. It is a fun way to be involved with the energy recapture that makes green vehicles green. But alas, Toyota opted to use the paddles for another task.

RAV4 Prime Paddle Shifters - Not Infotainment Controls
General Motors and other brands now use the paddles in some cases to control audio volume and station selection. We think that is a good use of paddles, but not the best use. Those functions are easy to control using front-mounted steering wheel controls.

RAV4 Prime Paddle Shifters - Here’s The Scoop
We reached out to Toyota’s technical team who offered us a generous amount of support in our coverage of the RAV4 Prime. What we learned, in a nutshell, is that the paddles control the rotational speed of the engine. In other words, they control the revolutions per minute or RPMs. Just like in a sports car like a Subaru WRX, or in a supercar like a McLaren. 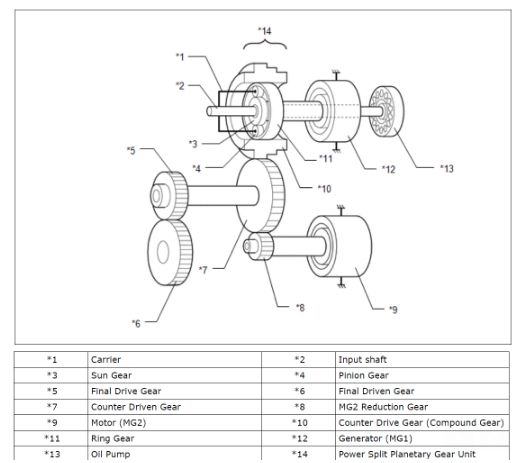 Toyota calls its system Sequential Shiftmatic Mode. The system is actuated by the paddles. The hybrid transaxle compound gear unit (transmission if you will) electronically controls the gasoline engine’s RPMs within six stages to increase engine braking under lift-throttle conditions and to enhance acceleration response when the accelerator pedal is depressed. A pull on the left paddle initiates the first level. Subsequent pulls initiate the added levels, or more “downshifts.” A pull on the right paddle brings you back one setting (upshifts) and a pull and hold on the right paddle will return the vehicle to the automatic drive mode.

This is how paddle shifters work on almost every modern vehicle. Since the RAV4 Prime uses a form of continusously variable transmission, the engine speeds are not set “gear” ratios, but rather electronically-programmed ranges. Regardless of how an engine gets to its higher RPMs, the result is the same. More power and more torque in the upper ranges. And when decelerating, more engine braking.

The Sequential Shiftmatic Mode mode isn’t designed to increase electrical regeneration. Rather, it is a feature that enhances driver engagement by providing similar characteristics to what drivers would experience when manual shifting a conventional transmission in an old-school ICE vehicle. It is designed to make the RAV4 Prime more fun to drive.

Since the Sequential Shiftmatic Mode takes over control of the engine speed, Sport and ECO modes are suspended when one uses the paddles. This is because those modes act as engine speed controls themselves.

In a nutshell, the paddle shifters in the 2021 Toyota RAV4 Prime ehnace an already enjoyable driving experience. They allow a driver to be more involved in spirited driving.

Acknowledgements:
Torque News would like to thank Tom Kretschmann, Product Technology Education Planner at Toyota, for his help in explaining this interesting system. We have liberally paraphrased his words in the explanation above. Also, Nathan Kokes, Toyota Product Communications Senior Manager, and Corey Proffitt, Toyota's East Coast Communications Manager, for help in setting up the communication channels. We would also like to tip our hat to Torque News reader/commenter, Dan, for requesting this deep dive story.

Dan wrote on September 8, 2020 - 7:09am Permalink
A sincere thanks for the follow-up! Not what I wanted to hear but at least we all know the truth. Looking forward to more of your informative writing, thanks again.
J wrote on January 10, 2021 - 6:25am Permalink
Ah, but what happens when the RAV4 Prime XSE is in full EV mode? Hint: the paddles DO increase/decrease regen. I've experienced this firsthand in my own R4P XSE.