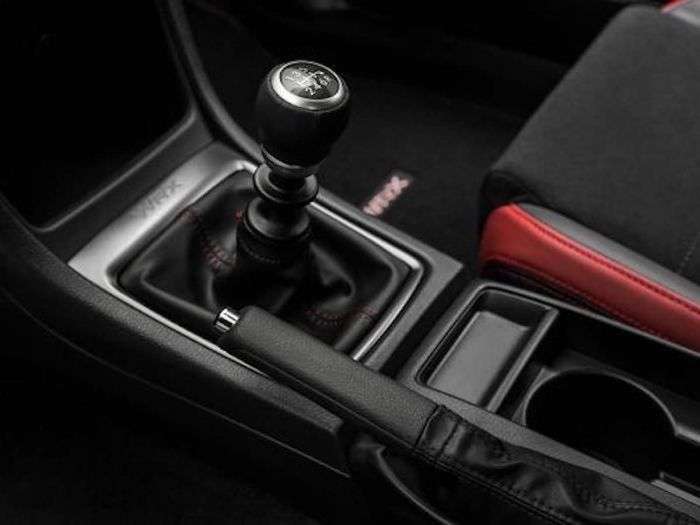 Subaru offers a 6-speed manual gearbox and a new Sport Lineartronic CVT in the 2018 WRX. Does the CVT offer the same performance?
Advertisement

Let’s face it, not all WRX buyers are die-hard Subaru fans. Around 60 percent of new WRX buyers are new to the brand. When it comes to transmission options, the 6-speed manual rower isn’t a clear-cut choice for everyone. Which transmission is best for you?

We had a chance to drive the 6-speed manual gearbox and another 2018 WRX with the Sport Lineartronic CVT back-to-back to see what the differences are in performance. Subaru put both new gearboxes in the new-generation WRX performance sedan in 2015. Previously, In 2014, WRX only came with the 5-speed manual transmission and no automatic option, so both are significant new enhancements for the new generation sport-tuned WRX.

WRX now has a six-speed manual gearbox like its stablemate WRX STI. It’s a big improvement over the previous 5-speed, and the first-ever application in the WRX in 2015MY, is now standard and it complements the 2.0-liter 268hp Boxer turbo powerplant in a big way. From the very first drive, we could feel the difference with its wider ratio spread over the previous generation five-speed.

The new gearbox is a joy to shift and Subaru upgraded the drivability on the highway considerably with the extra gear with a final ratio of 0.666 compared with the 5-speeds 0.738 5th gear. The performance sedan performed better than expected on a twisty canyon road just out of Denver leading up to Evergreen. The short-throw shifter provided quick smooth shifts up and down as we powered up the two-lane canyon road.

WRX’s 6-speed gearbox features a wider ratio spread than the old 5-speed and incorporates several performance and durability improvements that improve performance. The upgrades include carbon synchronizers for first and second gears and a cable-shift linkage for smoother gear shifts during both upshifts and downshifts. The difference is noticeable.

Halfway through the week, we were at a local Denver Subaru dealer helping a friend purchase a new 2018 Forester and the sales associate asked about the WRX we were driving. I told him it was the WRX Premium with a 6-speed and I hadn’t driven a WRX CVT model yet. He said the dealer just got one in so I jumped at the chance to drive it and out we went for a test drive. We headed up I-70 into the mountains to one of my favorite roads to test performance vehicles. We took a twisty mountain road with lots of altitude gain.

The WRX CVT models feature Subaru Intelligent Drive (SI-DRIVE) and we could choose from three selectable modes; Intelligent, Sport, and Sport Sharp. We put in Sport Sharp which gets the maximum potential from the engine. The CVT surprised me with its quick response when we mashed down the gas pedal. We kicked the WRX in gas and the performance sedan responded impressively to every push of the accelerator. It delivered smooth shifts through eight electronically controlled steps as we flew up the mountain road.

The driver can also use the steering wheel paddle shifters and choose electronically controlled steps which simulate actual gears for a more engaging driving experience. We moved the CVT into Sport mode and operated the transmission with the paddles and worked through the six-ratio automatic. The CVT responded more like an automatic with real gears when we powered the WRX manually with the paddles from a standing stop. Intelligent mode is for city commuting and programmed for the greatest fuel economy of the three.

Overall, we were genuinely impressed with the Sport Lineartronic CVT in the WRX. Would we recommend it to performance enthusiasts? For those who use their WRX as a commuter vehicle in heavy stop and go traffic regularly, the 6-speed manual can become tiring day after day. When it comes to fuel mileage, the more fuel-efficient 6-speed manual gearbox picks up a 3 mpg gain over the more fuel-thirsty CVT and the automatic is an additional $1,200 option.

When performance enthusiasts hear CVT, they run for the nearest exit and WRX purists are buying 6-speed manuals at a 20-1 clip compared to the CVT. But Subaru and Subaru Tecnica International (STI) have done a good job with this Sport Lineartronic variant. The new Sport Lineartronic CVT doesn’t sacrifice much performance and does gain a lot in driving comfort on daily commutes and driving in city traffic. You can choose your level of driving dynamics and still have a 2018 Subaru WRX that pegs the fun-to-drive meter. Unless you’ve driven one, it will be hard to convince loyal WRX fans to switch.

Big Engines wrote on March 5, 2018 - 12:59am Permalink
I drive WRX with CVT, it's cool and feel strong of the engine but it's not faster as manual gearbox, the big problem of CVT is too slow in first acceleration between 0-10 mile/h but after that will feel the strong acceleration, i wish they find solution for this problem cause i think it's not in Subaru CVT only! all CVT have this problem, also there is bad thing from the CVT is the limited modification cause CVT can't hold much power as traditional automatic transmission, in Subaru Japanese website the version of WRX in japan only have CVT no manual gearbox! but the eninge power is different which is 296hp! and 400 N. m (295 lb-ft !) it's too close of WRX STI power. I wish at least Subaru make an automatic transmission for WRX STI but not CVT at all, better be DCT (Dual-clutch Transmission) will be too cool and better for modification and big chance will be faster from manual gearbox in drag race and tracks same as VW Golf R
Concerned Poten... wrote on March 20, 2018 - 4:20am Permalink
In many WRX review between the CVT and MT, the fuel mileage discussion always conclude in MT > CVT. But that doesn't make much sense to me, how can a transmission designed to deliver peak torque and max speed consume more gas than flesh and bones? With a little bit of digging, it turns out that in order to receive a MPG rating in america, all automatic transmission must average fuel consumption across all drive modes. So even if the Intelligence mode may have excellent fuel economy, it would be offset by the Sport# mode with the simulated gear ration (a feature that was only put in to satisfied customer with bad preconception about CVT transmissions). In day to day driving, the average driver of CVT will probably not drive the modes in 33%-33%-33% (for I/SI/S# modes), but more likely 60%-20%-20% if not more in I mode. How will that affect the mpg rating? I have yet to come across an real world review and comparison of this scenario online. Maybe TN can test it out and publish the findings?
Seattle WRX wrote on December 2, 2018 - 12:08am Permalink
I have purchased a 2018 limited WRX with the CVT over a year ago. I live in Seattle, WA and have about a 45 min commute (each way) in traffic. I absolutely love my WRX. Prior to this I had owned a 2015 Impreza and it was cool in all but just had no power over 50mph. The WRX can really go, especially in sport sharp (8 speed CVT). As previously mentioned the 1st 10 mph could be improved. The eye sight adaptive cruise control is a cool feature as well. My only complaint really is with the road noise, but I got the upgraded Harmon sound system. (Which I also highly suggest). All in all, I think I made the right choice. It was debating between the WRX, Audi A3, and BMW 328. Performance wise the WRX smashes the rest, but the BMW had a comfier ride. Haters can hate on the CVT but I bet 9/10 haven’t even drove one.
Ry wrote on April 12, 2019 - 6:31am Permalink
It will be all fun and games until a very underpowered honda civic turbo slaps you when the light turns green and you know with a real transmission you would of smoked them. But then again if your not into that sorta thing maybe shoulda just stuck with the base impreza.
Me wrote on May 15, 2019 - 8:41am Permalink
Not everyone who drives fast cars has the mentality of a 12 yr old insisting on drag racing (illegally) at stop lights. There are other aspects of a car that make them fun to drive.
Ry wrote on September 12, 2019 - 10:21pm Permalink
TIL that anybody who has ever had a bit of fun with somebody at a red light is 12. God your just a Karen aren't you. And most people who buy cars meant to be fast usually want to drive them fast here and there with friends or people looking to have a bit of fun. Also dont jump so quickly to conclusions as it is illegal to go above the speed limit but getting up to 60 faster than the guy trying to get there beside you isnt illegal and can be some good spirited fun. Like I said your a Karen, and everybody hates Karen.
Tom wrote on September 8, 2020 - 4:15pm Permalink
Actually it is illegal to race from stop to stop sign. You have the right to plead not guilty, if no one is hurt. Or you can do 9 years, like my brother's friend, for killing a kid on a bicycle. The witness? A woman watching both cars from behind. PS: I can run and gun in any 4 banger as most people don't know how to drive. Once another joins in, I'm done. Two cars = jail in the worst case scenario. I'd rather die. Just the facts...
Me wrote on May 15, 2019 - 8:45am Permalink
Not everyone who drives fast cars has the mentality of a 12 yr old insisting on drag racing (illegally) at stop lights. There are other aspects of a car that make them fun to drive.
Jeff Schaibley wrote on January 2, 2019 - 11:51pm Permalink
I have a 2016 WRX with a CVT with less than 25k miles on it. It is currently sitting at the dealership awating a new transmission to get installed! No I don't abuse my car. No I will never purchase another WRX with a CVT nor would recommend anybody else to buy one.
amick1995 wrote on January 9, 2020 - 1:55pm Permalink
That is a common problem with the CVT models. Most people who take them to stage 1 have this issue, and a lot of tuners wont even touch the CVT.

LG's New EV Battery Plant Is a Welcome News for Tesla
Tesla Giga Berlin's New Hurdle: It's Not Only the Gov't, but Now Tesla Itself
END_OF_DOCUMENT_TOKEN_TO_BE_REPLACED