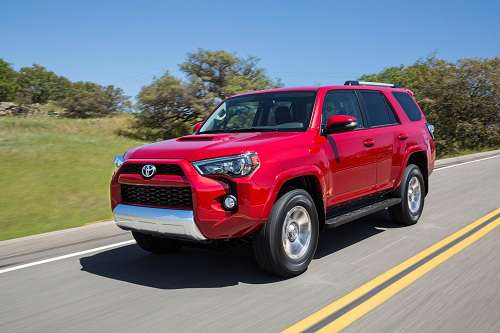 The new 2014 Toyota 4Runner stays a rugged SUV, unlike the Nissan Pathfinder which is now on a car-based platform. Is this the last "right-sized" real SUV in the US market?
Advertisement

The 2014 Toyota 4Runner is one of the last remaining “right-sized” SUVs. While the Nissan Pathfinder and others like it have migrated to a unit-body crossover design, the 4Runner remains proudly body-on frame. That means that the 4Runner is more rugged, and more off-road capable than all but a few of the 5-plus-two seating SUVs in the world.

Toyota has the excellent Highlander (link at bottom of page), new for 2014, to impress the bulk of families that really want a high-riding car with all-wheel drive instead of a mini-van. What the 4Runner can do is tow all but the most ridiculously sized boats or trailers and still act civilized enough for Mom to use as her daily driver. Dad can also take it hunting once a decade and maybe find a few trails to remove paint and add some smiles. Available as either a 5 passenger or a 5 plus two in the third row, the 4Runner is sort of a muscled up Highlander for those that think they need to be able to drive to Moab for some rock crawling and then pick up the kids at day care on the way home.

4Runner Key Drivetrain Features
The 2014 Toyota 4Runner carries on with its more than capable 4 liter, V-6 engine producing 270 HP and 278 lb-ft of torque. This is the bulldog of the Toyota line and it is used now on fewer and fewer vehicles. It is mated to a 5 speed automatic. This combination will allow the 4Runner to tow up to 5,000. I checked with a pal who has a very big boat and asked him how much it and the trailer weighs. He said conservatively 3,500 pounds. This is a boat capable of off-shore fishing miles from land that can comfortably accommodate 6 adult passengers and their gear. If you need to tow more than this, you don’t need more truck you need a mooring and a seasonal service to help put the vessel away for the winter.

The 4Runner can come three different ways in terms of its drive systems. Regardless of which 4-wheel drive system the customer chooses mileage for the 4Runner is 17 MPG city and 22 highway. Not bad for what the vehicle is, but not good when one compares this to any crossover similarly sized. The vehicle comes in three trims and they are related to the drive options. The base unit is called SR5 and it is where the value is for most family buyers. The next step up for family vehicles is the Limited which has all the luxury items one would expect. In between is the Trail. Trail is for the 2 percent of 4Runner buyers who will use the vehicle frequently off-road, and the 98% that pretend they will.

4x4 models in the SR5 and Trail trim come with a part-time 4WD system with two speeds and a neutral position to help save fuel. The Limited has a full time 4x4 system (some would say all-wheel drive) that can lock its center differential. That version has a 3-mode selector switch mounted up high on the headliner. All of the options come with A-TRAC traction control that can route all the power to one wheel if need be. On-road this is almost never needed.

Trail grade gets two special off-road features. CRAWL control allows the vehicle to do just that. Unlike the commercials showing vehicles blasting through huge mud holes, almost all off-road driving is done at a walking pace. This feature allows the vehicle to simply move along very slowly and increases the sure-footedness. Mercedes G-wagons and Range Rovers have systems like this. Basically, the vehicle takes over the throttle and braking ability and the car moves very slowly along. The Trail also gets an optional Kinetic Dynamic Suspension System (KDSS). This allows the vehicle to actually uncouple parts of its suspension so the wheels can bend and twist independently. Off-road enthusiasts know why this is important. It is the equivalent of a small wing that would deploy on a supercar at 210 miles per hour. Very cool to have and talk about, almost never in use. The Trail also gets Multi-terrain Select system that allows the 4Runner driver to match the surface to the drive system. One of the settings is called Mogul. Need we say more?

All 4Runners get Hill-start Assist Control (HAC). This is actually very practical. It is not unusual to need to stop, and then do a K-turn off road or on snowy roads which are on a steep incline. This system is very helpful in keeping the vehicle from getting stuck. We have used this system on a Lexus RX350 and it worked well. Similarly, Downhill Assist Control is standard on all 4x4 models. It does what it says and no respectable of-road SUV would be without this.

In Summary, you can equip a 4Runner to be very competitive with the best off-road 5 or 7 passenger vehicles on Earth. Toyota needs a vehicle like this to expand on the FJ Cruiser, which is really a Jeep competitor.

4Runner Styling
In 2014 the Toyota 4Runner continues the trend of being tougher-looking. The front fascia now has sharp angles and indentations that make it look very rugged. Offsetting that is chrome. Why anyone would ever put chrome on a truck or off-road SUV is beyond our understanding, but it is now on both the front and back of the bumpers. The front chrome part is low and looks like a skid-plate. Headlights are more modern projector bean units and they get that smoked look. Again, darkening a lighting unit is a mystery to us, but since the tuner dudes did it back in the 1980s it has been a styling cue that is supposed to look cool. There is a hood scoop, and that does impart a performance theme to the vehicle.

4Runner Interior and Safety
Inside the 2014 Toyota 4Runner can have cloth, Soft-Tex, or leather on the Limited. The leather is now perforated. The interior is updated now and the Entune telematics system makes an appearance. On Limited there is a JBL audio system. All the features one would expect in a luxury SUV are now available such as smart-key and a forward collision mitigation system. Cross-traffic alert seems to be missing, but Toyota may have just forgotten to mention it since the list of safety features on vehicles in this class has become so long now.

Seats in the 4Runner can fold flat. Even better, there is a fold out cargo deck that can hold 400 pounds. This will be a great camping table, or will make loading and unloading items easier. Toyota does not say so, but it is also likely that long items from the Home Improvement Store will be able to be taken home sticking out the back with the tailgate bungee corded down.

Summary
The 2014 Toyota 4Runner is important to Toyota because it fashions itself a full-line auto maker. Toyota sells about 55,000 4Runners per year though, which means it is a real vehicle that many families want. Over time this will start to shrink as people realize the Highlander is as capable as this vehicle in every single way except when it is being used as a mountain bike.
For news on these other SUVs, crossovers and trucks click the blue link:
New RAV4
2014 Tundra
2014 Highlander
2014 Nissan Pathfinder