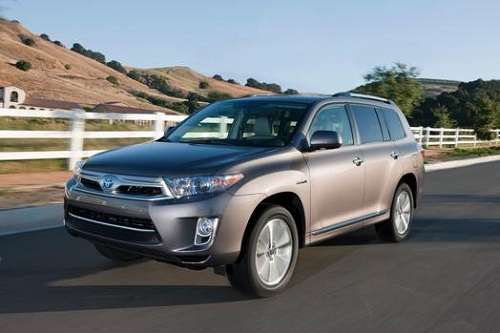 Toyota has announced the 2014 Toyota Highlander. Here are the changes buyers should expect to see.
Advertisement

Toyota has announced that it will reveal the all-new 2014 Highlander at the New York Auto Show in two weeks. The Highlander has been basically the same since 2008, when it moved to the larger, Avalon type platform away from the shorter wheelbase Camry platform. Six years with the same design is a long time for most brands, but Toyota does have the habit of keeping its crossover models in production longer than its cars.

Part of the reason that Toyota can keep its Highlander and RAV4 unchanged so long is that it defines those categories. Leadership has its perks. The fact that Toyota has the best resale value, and wins most, if not all the quality awards, such as the J.D. Power and Associates Initial Quality Study, does not hurt either. The competition has to scramble to keep gaining on Toyota, and it isn’t clear they are. Toyota’s sales are actually up this year for the Highlander, not down. Any manufacturer that can do that in a model’s last year of production is doing things right.

What Toyota Will Change Mechanically On the Highlander

Toyota has not made an official announcement yet, but based on regulatory requirements, and market realities, Toyota has to improve the 2014 Highlander’s fuel economy. It is currently lagging the competition by about 10%. The popular V6 all-wheel drive model rates only 17 city, 22 highway MPG. It would be shocking if Toyota introduced a new engine to replace the 3.5 liter engine it now uses. Direct injection is easy for Toyota to add, in fact, the Lexus line already has some sporty models with this same engine using direct injection, but our guess is they don’t do it. The current Lexus RX350 still doesn’t have direct injection and Toyota almost never lets the Toyota branded vehicles leap ahead of the Lexus line in technology. However, look for the aging 5 speed automatic transmission to be replaced with a 6 speed auto, or possibly a 7 speed. A CVT is not out of the question, but let’s say a prayer to the car Gods it doesn’t happen.

The Highlander Hybrid will of course continue, but will roll out slightly after the initial 2014 Highlander does. It will adopt the current hybrid drive from the Lexus ES300h and will see an increase in MPG. In two wheel drive configurations this will almost certainly become the segment leader in fuel efficiency.

Style Changes on the 2014 Highlander
If there is one easy area for Toyota to improve the 2014 Highlander it is in the looks department. The 2013 Highlander looks like an LL Bean boot compared to the sexy new Hyundai Sante Fe stiletto. Toyota likes its looks conservative, but the Highlander isn’t doing itself any favors by mimicking the old-school 4-Runner’s looks. We suspect the new Highlander will look a lot like a big RAV4 and that is a darn good thing. The RAV4 combines class with pizazz and now owns that market, even as Ford Escape and Mazda CX-5 put out great looking cute-utes. Inside the Highlander will offer the same materials as the RAV4 as well, with Leather being a top of the line treatment. Roof racks will become more integrated with the roof-line, rather than sticking up like they do now.

Safety and Other Highlander Changes
Sadly, we suspect strongly that the 2014 Toyota Highlander’s full size spare will shrink to a temporary compact model. We hope not, but it seems the trend. This is Toyota’s chance to do that in the name of weight savings and cargo capacity, but it will really be to save money, as it always is. The third row seating will continue and Toyota will work some magic to grow the inside measurably, while keeping the exterior dimensions about the same. Safety is where the Highlander will really see changes. Like all vehicles in this segment, more will be standard such as a back-up camera. However, the big additions will be blind spot detection, rear cross traffic alerts, and a lane departure system. Toyota may even add a collision and pedestrian prevention system that actively applies brakes.

Toyota will show us the evolutionary 2014 Highlander on March 27th and Torque News will be there to cover the release and report the changes.