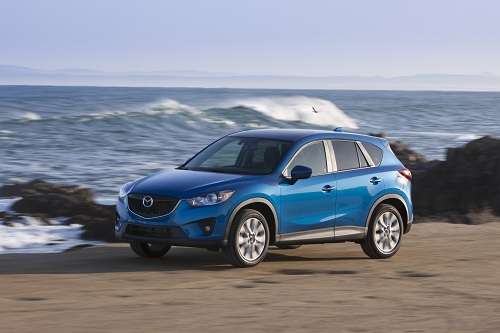 The 2013 Mazda CX-5 is very hot right now. The hottest sales segment in sport utilities right now is the compact cute-‘ute. Led by the Honda CRV and others, this segment matured from a footnote in sales to one of the largest in all of auto sales. Every manufacturer is vying for a slice of this very large pie. Mazda had a very safe and very boring entry in this market based on the previous generation Ford Escape. Sales were unimpressive. In order to reverse that, Mazda embarked on a bold plan. It would completely redesign its offering in the segment and replace not just the outgoing car (which has already been forgotten, but was called the Tribute) but also its somewhat successful Mazda CX-7.

2013 Mazda CX-5 Shatters Sales Goals
To say that the plan is working is an understatement. In a press release, Mazda announced that its goal for sales in the Japanese market of 12,000 units annually was exceeded in only 2 months. In the Australian market the CX-5 is the country’s best selling compact SUV. Sales orders in Russia and Germany combine to over 12,500 vehicles. In the US the Tribute sold fewer than 2,700 units in the full year 2011. Even with limited production volume available, the new CX-5 is currently selling about this number every MONTH with projected annual sales in the US at over 30,000 units. There are three main reasons why the 2013 Mazda CX-5 has been so successful.

2013 CX-5 Is the Right Size
Being the right size for the segment is more art than science. As models mature, they tend to creep up in width and length. As a new model is introduced the question is, does a manufacturer target the size of the segment now, or what it will be at the end of the production cycle which is usually 4 to 6 years. The Detroit based brands always default to the largest size. The Asian brands generally shoot for the small end or the middle. Mazda took this approach and has nailed the “right-size” formula. Not too small, but not too big. Goldilocks would love this car.

SKYACTIV Performance
In this segment trying to be fast is difficult. The premium brands offer very fast compact sport utes and the Toyota V6 RAV-4 is a rocket. Most of the other entries are not fast and Mazda took that approach to maximize fuel efficiency. It came away with the best highway fuel economy of any entry in the marketplace with 35MPG. In a class where breaking the 30MPG highway number is difficult, that is a huge advertising advantage. The CRV which defines the segment has a 31 MPG rating advertised. Mazda realized that the most important performance parameter in this segment would be MPG and it engineered the car to beat rivals. Mazda labels this design philosophy SKYACTIV.

Top Safety Pick
Many buyers of small SUVs are families that would rather drive a mid-size SUV, but are not able to for economic reasons. These families will not sacrifice safety for economy, so the fact that the CX-5 was chosen as an IIHS “Top Safety Pick” gives those buyers the assurance that they are doing the right thing for their family. By designing the CX-5 to be the most safe vehicle in its class (or equally so) it helps families move down to the compact segment without guilt or worry.

The 2013 Mazda CX-5 has exceeded all expectations and the reasons are not accidental.

Toyota vs Tesla: Which Stock To Buy These Days
For Some Former Daimler Managers Daimler Is Authority, While Tesla Is Like a Startup
END_OF_DOCUMENT_TOKEN_TO_BE_REPLACED