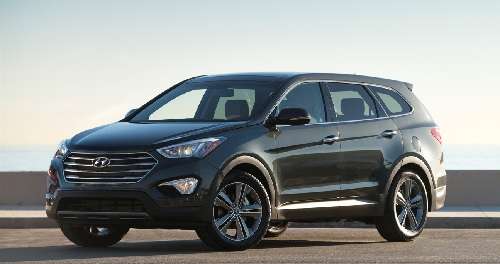 Hyundai has announced prices for one of the best values in the 3-row compact/mid-size crossover marketplace. Hidden in the announcement is a fuel economy surprise to some.
Advertisement

When Hyundai announced that the 2013 Santa Fe would be two models, a two row seating version called the Santa Fe Sport, and a three row version called the “Santa Fe”, Torque News predicted we would see the Hyundai 2.0 Turbo engine move to the new platform. We were correct. However, although that engine makes a respectable 264 horsepower, family oriented customers and enthusiast alike know that you cannot beat a V6 for fuel economy and power in this size vehicle. Hyundai has announced prices for the just released 3-row Santa Fe and in doing so also revealed that the highway fuel economy for the smaller 2.0 Turbo 2-row Santa Fe Sport (all-wheel drive) AWD is the same as the larger 3- row Santa Fe with AWD. Overall the difference is 1 mpg combined. The bigger vehicle with the larger engine gets the same highway mileage?

When the Santa Fe launched and it was revealed that the AWD could only achieve 24 mpg highway we were stunned. That is not better than some of the V6 vehicles currently on the market such as the Acura RDX. So why use a smaller, turbocharged engine in the first place? The answer that seems to be coming into focus is cost. Vehicles with the smaller turbocharged engines have a slightly lower cost compared to the modern V6 vehicles in their line-up. We compared the Santa Fe Sport 2.0 Turbo with every option package to the Santa Fe Limited with every option package and here is the result:

Please note that these are the most expensive Santa Fes that can be configured. Here is a breakdown of the starting MSRPs for the Santa Fe with 3 rows and the 3.3 liter V6, the only offered engine:

Using the Hyundai on-line configurator one can easily add $ 4000 in options to a Santa Fe, but that is not uncommon for the class. Hyundai is garnering more up-market customers as of late. Therefore, for our comparison we chose to look at the higher trims of the competitor’s crossovers. For comparison purposes we also configured two competitors as closely as we could to the top level Santa Fe, and here were the results:

Based on our analysis of the competition, the all-new 2013 Hyundai Sonata with three rows of seating and a powerful, fuel efficient V6 seems hard for customers to ignore. Always one of the company’s best-selling models, it appears Hyundai has another winner on its hands.