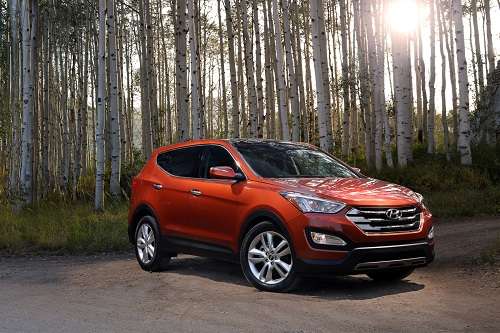 In a stunning upset, The Texas Auto Writers Association preferred the Hyundai to all of the offerings from the American and Italian companies
Advertisement

In a stunning upset, the Texas Auto Writers Association (TAWA) held a Texas Truck Rodeo and have awarded the Hyundai Santa Fe the top award in its segment. The compact sport utility market is red hot and makes up one of the largest segments in the crossover world. Hyundai has been steadily and consistently improving the Santa Fe since its introduction. The work the company has done has resulted in an award winning vehicle that has mass appeal.

Without characterizing the TAWA unfairly, it is fair to say that Texans in general prefer “American” trucks. Whatever that is. Italian company Fiat’s Jeeps and Ram trucks took home most of the prizes in the rodeo. The new RAM is a breakthrough vehicle for Fiat's Chrysler Group, and it is has upped the ante for both Ford’s F150 and the Chevy Silverado. These vehicles drive the profits at their respective companies and are critically important to their financial success. Hyundai wisely looked closely at the “light truck” market in American and decided to skip the pickup truck segment all together. In my home town we call that “wickid smaat.” Sometimes it is better to pick fights you can win (Hear that Floyd Mayweather Jr.?).

Hyundai had a US hit on its hands from the first 2001 Santa Fe. The vehicle did well and helped move the focus away from its entry level econoboxes. In 2007 the Santa Fe grew up. Hyundai knew the Toyota Highlander was the segment leader then and simply copied the vehicle all the way down the specifications sheet. Hyundai even copied the oddball displacement of the 3.3 liter engine Toyota offered. Toyota then supersized the Highlander, moved it to the Avalon platform from the Camry platform resulting in a wheelbase stretch. The result was the Highlander’s appeal was diminished. The Santa Fe soldiered on in the “just right” size it was granted by the Highlander to the delight of fans. TAWA president Michael Herzing paid this compliment to the Santa Fe; “TAWA members overwhelmingly selected the 2013 Hyundai Santa Fe Sport as the Compact Crossover of Texas. Crossovers are important to Texans as they need vehicles that deliver on comfort, functionality and reliability. Hyundai exceeded those expectations and had the best product in the category.”

In 2012 the new, current generation of Santa Fe was launched as a 2013 model. Rather than follow the pack with a V6 engine, Hyundai looked to its now proven 2.0 liter direct injected, turbocharged engine (a move foreseen by Torque News). That mill had proven itself solid, reliable, powerful, and efficient in both the Sonata and also the Genesis coupe. This new engine for the Santa Fe brings the most torque in the segment according to Hyundai, and with about 270 horsepower, more than enough gitty up and go to make the vehicle a legitimate sports compact sport ute. At this point Hyundai also made a very wise marketing choice. In this size, a three-row, seven passenger layout is possible, but the rear seats are only 2/3s of full size. The result is that less enlightened auto writers, and less cutting edge publications then score that vehicle lower because a 6 foot, 250 pound test writer feels like the rear seats don’t fit him. Of course, the seats are for little kids, but nonetheless, the articles get written. Worse, the vehicles get bigger. See Honda Pilot, Toyota Highlander. In a cunning marketing move, Hyundai decided to offer the 5 passenger Santa Fe as a “Sport” and also a slightly stretched wheelbase 7 passenger version. Thus, those who want a compact, “right-sized” CUV can buy a Santa Fe, and those who have little kids, and want to be able to fit the grandparents into the middle seat on the way to church or dinner, can do so. Hyundai benefits because building model loyalty and awareness is expensive. It can now advertise a “Santa Fe” to two groups of buyers. Owners win because Hyundai does not have to follow the leader and bulk up their vehicle to compete in seven passenger comparison tests that automotive magazines invent to anoint a winner.

Hyundai now has two V8, rear drive sedans. Lincoln has none. Hyundai now has the most powerful V6 rear drive pony car (Chevy and Ford do not). And now Hyundai has the top compact sport utility vehicle on the planet in the eyes of the Texas Auto Writers Association.