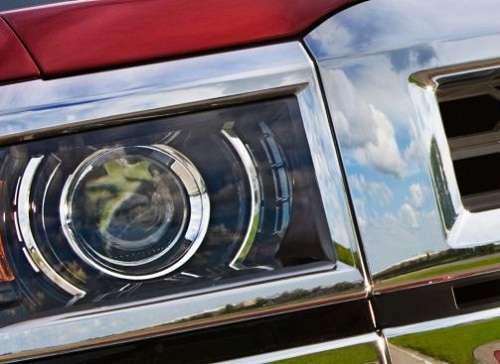 GM's best-selling vehicle, the 2013 Silverado all new in December

The top selling vehicle at GM since the dawn of time will be completely new in December. Here is what fans can expect and why it matters.
Advertisement

Without the Chevy Silverado General Motors would not be profitable. During the 2008 economy implosion, and even prior to that, it became clear to auto-stock watchers that small American economy cars don’t earn any money for their builders at GM, Ford, and other legacy American car companies. The reason for this can be debated, but the fact is that without strong sales of the big, body-on-frame vehicles that American customers from coast to coast (but especially in the middle of the country) prefer, GM is a dead duck. There is no Volt, no Corvette (although the Corvette is likely very profitable), no Cruz, and no Malibu. On December 13th, 2012 General Motors will unveil to the public its most important product’s newest generation.

Before we dive into what customers can expect, let’s look at some more Silverado facts. Last month, the Silverado had a bad month selling “only” 36,425 units. That is down about 16% from September 2011. That is a sales trend that General Motors, and its two main stockholders, the American Taxpayer, and The United Auto Workers Union, do not want to continue. GM is presently slashing costs everyplace it can, and is delaying new product development to prepare itself for sale to private investors. Some say that this is to allow for top managers to pay themselves what they want, rather than continue to earn pay under the salary cap imposed by the government after the company’s failure and bailout. In any case, GM will be looking for a nice push from its heavy hitter in the months surrounding the sale. The timing of the new Silverado and the stock sale will coincide.

At 36,425 units per month (in a bad month), the Silverado is still a huge seller by any measure. Much of the auto news reported here at Torque News and everywhere revolves around new energy efficient vehicles. For example, the Prius was just announced as the best selling car in California. The Silverado outsells the Prius (all of 3 of the styles combined). The Nissan Leaf, Chevy Volt, and the Fisker Karma combined get a huge amount of press. The Silverado outsells all of them, the Prius, Volt, Leaf, and Karma – combined. And it is profitable, and does not require any taxpayer bribes (tax incentives, or breaks) to do it. The new SKYACTIV technology from Mazda is a serious engineering breakthrough and will be highlighted by Torque News in coming stories. Silverado does not just outsell the Mazda SKYACTIV offerings, it outsells Mazda.

A vehicle this critical to the success of GM cannot fail. When the competition ups the ante, the Silverado must respond. Based on the American Ford F150 family of vehicles recent changes, and the truck offerings from the Italian company called Chrysler (still thought of as an American brand), we can predict what is to come. Fuel efficiency will be improved. To compete with the newest trucks Silverado will have to make gains. It would seem that unless GM has been hiding a big secret, Silverado will use cylinder deactivation and direct injection to make these gains. The horsepower race is over. The new spec sheet battle is over how many single MPG over 20 can the big trucks go. In-vehicle connectivity will also be highlighted. Finally, the Silverado will have a tough new look. Tough new look is required now for every truck maker, and has been for the last 3 or 4 generations of trucks. If your truck does not look like a Peterbilt in the rear view mirror of a Prius, it isn’t cool.

In a press release yesterday, GM did leak some style information. It told the public that the headlights of the Silverado will change. Who would’ve guessed! GM calls the new headlamps “jewel-like projector beams.” This may be code for “We are not going to do the LED thing.” If so, halleluiah, enough with the little shiny dots already.

The new generation of the most important vehicle to GM will be introduced in December. Look for a full update and review here at Torque News.

Erma wrote on June 18, 2018 - 6:14am Permalink
It's a shame you don't have a donate button! I'd without a doubt donate to this brilliant blog! I suppose for now i'll settle for book-marking and adding your RSS feed to my Google account. I look forward to fresh updates and will share this blog with my Facebook group. Chat soon!