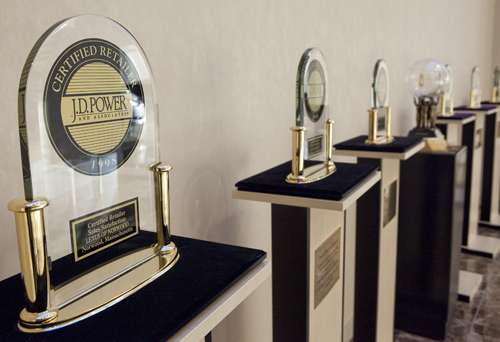 J.D. Power and Associates has conducted its Initial Quality Study (IQS) now for 21 years. The study was redesigned to make it more relevant in 2006. The study is important because it measure the number of problems reported by new owners aft they have owned their new cars for 90 days. During that period most problems that the vehicles left the plant with are revealed. This year’s study solidifies some know facts about automotive quality and reveals new trends that will help shoppers when they make a vehicle decision.

Toyota and Lexus Dominate the IQS Winners Circle
Toyota’s luxury brand Lexus, has again taken the top overall spot. With only 73 problems per 100 vehicles, it is far and away ahead of the high volume producers. Lexus makes its money on two models in its lineup. First, there are the RX350 and RX400hybrid, which dominate the premium mid-sized crossover market. Lexus created this niche and grew it into a segment. Lexus has earned the number one ranking for this category. The second car that Lexus earns much of its profits and revenue from is the ES350. This car is the near-luxury, mid-sized car that Lexus first introduced when it started. This car also wins its category. Toyota takes 5 of the 21 top awards overall making it the brand with the most number one cars.

Audio and Navigation Problems Grew
For the first time in the history of the study, audio and navigation systems had the highest rate of problems of all automotive categories. What is most interesting about this is that the highest rate of problems are reported by the youngest new car owners. In its press statement, J.D. Power and Associates clarifies that this is not because the equipment malfunctioned and didn’t work, but rather the younger buyers have a much higher level of expectation for their in-car infotainment. They are tech-savvy and they know a bad design when they see or hear one. Use to having their smart phones and MP3 players come with very intuitive controls they can figure out easily and quickly master, the younger buyers will not tolerate a system that does not work easily and completely. Thus, they report this as a problem.

The Overall Best Automotive Plants Are Asian
Can you guess which automotive plants did not receive any awards? If you guessed those staffed by United Auto workers you would be correct. Overall, the Honda Suzuka 3, Mie (Sss) plant in Japan received the Platinum Award for overall lowest defects. Plants are ranked strictly on manufacturing defects and design defects are factored out of the averaging. In North America, the two plants with the highest rankings were the Honda plant in Marysville, OH, and the Toyota Cambridge South Plant in Ontario Canada.

The new IQS report from J.D. Powers is helpful in understanding which cars consistently rank highest in quality year after year and what types of problems are most common and might be avoided.