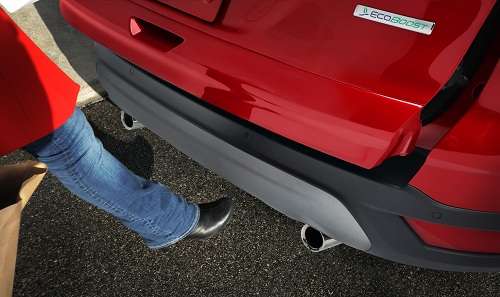 Ford’s 2013 Escape is the California Closets of automobiles with cubbies and clever helpers.
Advertisement

The first Ford Escape was a crude excuse for a CRV. It drove like a truck in all the bad ways and had the fuel efficiency to match. The interior was no prize and Ford sold a bazillion of them. The new Ford Escape is light years more advanced in every single way. There are many reviews including here at TN, but this review will focus on the storage capabilities of this cute-ute.

2013 Ford Escape Coolest Feature
Starting with the coolest feature on the list is the automatic tailgate opener. It is activated when the driver approaches with the smart key in pocket and then waves a leg under the rear bumper. The rear gate unlocks and raises. Ford is not the only company with this technology and it will soon be on everything, but for now the Escape is the only SUV in the world with this cool feature. Ford also claims that the sensor can tell if the object is mom’s foot in an Ugg, or an animal (say a honey-badger) and it will only open for mom. This feature is optional on the Escape, but if you don’t get it every single friend and family member is going to want to see it and then you feel really dumb having not opted for it.

Bigger Inside Than Out
The 2013 Escape looks about the same size or smaller than the outgoing boxy model, but it has more storage space. The trick of course is to make them bigger on the inside than they are on the outside. Eric Jackson, Ford’s vehicle architecture supervisor sums it up well, saying in a press release “The new Escape has … a number of storage bins and other unique storage features. Whether you have an umbrella, parking stub, cell phone, sunglasses or large water bottle, the new Escape has a specific place for it where it won’t get lost or roll under the seat. The hidden storage under the second-row floor is great for keeping items secure and out of view.” This begs the question of what items might need to be kept secure and out of view. If you are thinking gun, beer, and ammo, you may not fit the Escape’s target demographic, but look for these features to migrate to the Explorer and Expedition soon.

Drop and Fold
Ford can list out 8 nifty spots for stuff you didn’t know you needed, but do. Each is equally useful and you will use them. One feature that should be mentioned is the easy to fold rear seats. With the touch of a single button the seat backs drop and if you want even more space a quick lift of a lever makes them fold and dive down to create a flat surface. Every small sport ute should do this, but they don’t.

Ford has created great new chassis, has splendid infotainment, and extremely fuel efficient engines in the new Escape, but leg-lift tailgate and folding seats are what will be demonstrated at barbeques across America this summer.