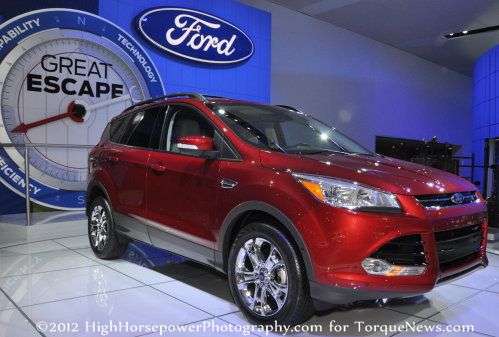 The EPA has just released their official fuel economy figures for the all-new 2013 Ford Escape and with the help of the 1.6L EcoBoost 4-cylinder engine, the new Escape is officially the most efficient vehicle in the class with an automatic transmission with all engines offering better than 30 miles per gallon.
Advertisement

The most fuel efficient engine for the 2013 Ford Escape is the 1.6L EcoBoost 4-cylinder, which makes its entry into the US market in the new compact SUV. The EPA rated the new 1.6L EcoBoost at 23 miles per gallon and a class-leading 33mpg on the highway. It should be noted that the new Escape is the most efficient compact sport utility vehicle with an automatic transmission although the Mazda CX-5 with a manual transmission offers 35 miles per gallon. However, compared to every other small SUV on the American market, the new EcoBoost Escape is the most efficient option on the market. In addition to offering class-leading fuel economy, the new 1.6L EcoBoost 4-cylinder offers 178 horsepower and 184lb-ft of torque – making it considerably more powerful than the Mazda CX-5 that rivals it in fuel economy figures (the CX-5 offers 155hp, 150tq). This engine is also more efficient than the outgoing Escape Hybrid models.

Those 2013 Ford Escape buyers who are more concerned with power than fuel economy can step up to the 2.0L EcoBoost engine, which packs 240 horsepower and 270lb-ft of torque while still offering 22 miles per gallon around town and 30mpg on the open road. Like the 1.6L EcoBoost engine, the 2.0L mill is available with front wheel drive or Ford’s intelligent all wheel drive.

The base engine for the 2013 Ford Escape S is the 2.5L Duratec 4-cylinder engine which is the only naturally aspirated engine in the new Escape lineup. Available only with front wheel drive, the 2.5L Duratec engine provides 168 horsepower and 170lb-ft of torque while also achieving 22 miles per gallon in the city and 31mpg on the highway.

The 2013 Ford Escape S carries an MSRP of $22,470 and there are no optional engines or drivetrain configurations for the new entry level Escape.

The Ford Escape has long been among the most popular vehicles in the United States in terms of sales volume and with a roomier interior and a lineup of engines that all offer at least 30 miles per gallon on the highway – the new Escape could help Ford Motor Company continue to lead the sport utility vehicle segment.