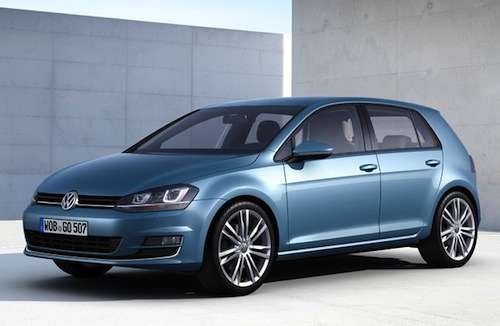 This is the second time the Volkswagen Golf has won the European Car of the Year Award, and third occasion that a Volkswagen model has received the honor.
Advertisement

On Monday, the Volkswagen Golf won the 2013 European Car of the Year award in grand fashion. Volkswagen’s all-new Golf earned 414 points, which was more than twice as much as the runner up, the Toyota GT86/Subaru BRZ. The Volvo V40, Ford B-Max, Mercedes-Benz A-Class, Renault Clio, Peugeot 208 and Hyundai i30 rounded out the field. Fifty-eight judges from 22 European countries made the decision, which was announced today at the Geneva Motor Show in Geneva, Switzerland.

Aside from a pair of Europe’s Car of the Year awards, the Volkswagen Golf has earned many other accolades since its inception. Last year, the Golf Mk7 was named “The All The Car You’ll Ever Need Car of the Year 2012” by Top Gear magazine. In 2010, the Golf was named to Kelly Blue Book’s list of “Top 10 Green Cars for 2010,” and won the World Car of the Year. Not to mention, the Golf has been named in the Car and Driver “10 Best” list numerous times.

Established in 1964 by a collective of European automobile magazines, the European Car of the Year award is one Europe’s most premiere awards and consumers an idea of what automotive experts think the car of the future is. The goal of the judges is to declare a “single, decisive winner,” hence there are no categories or class winners.

The award is currently organized by Auto (Italy), Autocar (UK), Autopista (Spain), Autovisie (Netherlands) L’Automobile Magazine (France), Stern (Germany) and Vi Bilägare (Sweden). Representation from each of this year’s 22 countries was based on the size of the country’s car market and car manufacturing industry.