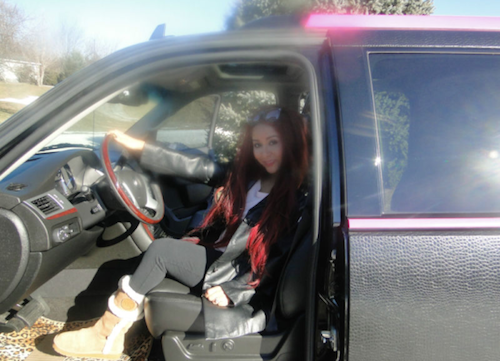 Are you in the market for a slightly used luxury truck? How about a Cadillac Escalade previously owned by Nicole “Snooki” Polizzi? Well, Polizzi’s 2011 Escalade EXT is currently up for grabs courtesy of eBay Motors. Not your typical Escalade, Polizzi’s former ride features custom wheels, ambient lighting, pink accents and a faux snakeskin-wrapped exterior. The Escalade emblem on the vehicle’s rear has been replaced with a badge that reads “Boss Lady.” Additionally, Polizzi autographed the vehicle’s hood.

Bidding has reached $72,200 as of Saturday, February 23. A $1,000 deposit within 24 hours of auction close and full payment is required within seven days. The vehicle is eligible for up to $50,000 in Vehicle Purchase Protection through eBay. Bidding ends on Sunday, February 24, 2013. There have been 72 bids thus far for Polizzi’s Cadillac Escalade.

KBB.com specifies that the private seller value of a 2011 Cadillac Escalade in similar condition, with similar features and mileage is approximately $53,000.

Not convinced of the vehicle’s value? According to the auction description: “This is not a vehicle that you can buy everyday, it is an opportunity to own a piece of pop culture history!”

Whether Polizzi’s association with the vehicle adds or detracts from the value is ultimately up to the buyer. Bidders interested in the Escalade’s pop culture value will be pleased to know that the high-end truck made multiple appearances on both Jersey Shore and the MTV spinoff series Snooki and JWoww.

The listing does not indicate why Polizzi is parting ways with her Escalade, but it may have something to do with the birth of her son Lorenzo last August. Perhaps the reality star may now be in the market for a vehicle that's more suitable for a young child.

Currently one of TV’s highest paid reality stars, Polizzi earned an estimated $150,000 per episode for season five of Jersey Shore. Aside from Jersey Shore and her spinoff series Snooki and JWoww, Polizzi has appeared on countless talk shows including The Ellen DeGeneres Show, Late Show with David Letterman, Jimmy Kimmel Live! and The View.