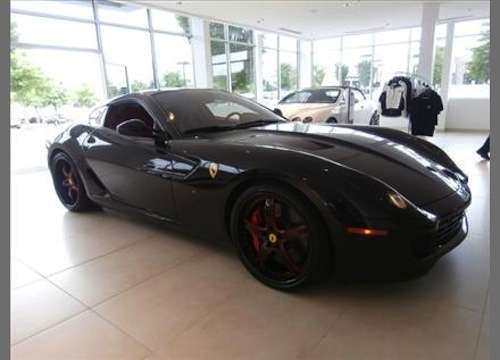 You might need to finance this one, because T.I. is asking $230k for his tricked out Ferrari.
Advertisement

Are you in the market for a lightly used Ferrari? Chances are you’re not, but it doesn’t hurt to dream. Hip hop artist T.I., whose real name is Clifford Joseph Harris Jr., is selling his 2008 Ferrari 599 GTB Fiorano for a whopping $229,990.

T.I.’s former Fiorano, which gets its name from a Ferrari test track, touts a 6.0L V12 engine that produces 448 pounds-feet of torque. It contains a six-speed transmission that features a shift pattern system that can tackle slippery of dry conditions. The rapper’s car also includes several custom options like an Alpine system, carbon fiber trim, red interior with black accents, and aftermarket rims. The vehicle has just 3,812 miles.

Though not confirmed, T.I. may be getting rid of his Fiorano to make room for his latest vehicle, a Bentley Mulsanne. The rapper recently posted pictures of himself with the vehicle on Instagram. Less common than the Bentley Continental, T.I.'s new Mulsanne reportedly costs $380,000.

Aside from T.I.’s new Bentley and former Ferrari 599, the rapper has also owned a Ferrari California, Dodge Challenger and a $400,000 Maybach.

Introduced in 2006, the Ferrari 599 GTB Fiorano is a gran turismo (grand tourer), which replaced the 575 M Maranello. Styled by automobile designer Frank Stephenson, the 599 GTB debuted at the Geneva Motor Show in 2006. Upon its release, the 599 GTB’s V12 engine and maximum 620 PS made it the most powerful Ferrari road car at that time. The car features a top speed of 205 mph and is capable of going from 0-60 mph in 3.7 seconds.

The 599 GTB was well received when it debuted, earning both the Evo magazine Car of the Year award for 2006 and the Top Gear Magazine Supercar of the Year 2006.

Earlier this year, the 599 GTB was replaced by the F12 Berlinetta, which was officially revealed at the Geneva Motor Show in March 2012.