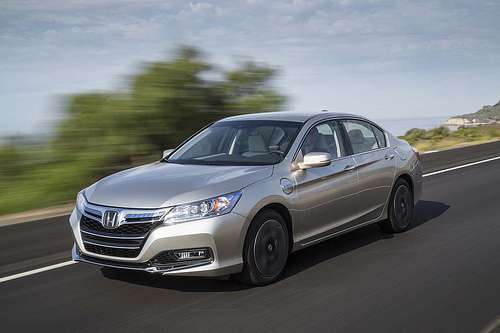 First look at the 2014 Honda Accord Plug-in Hybrid

Honda looks to give rival automaker Toyota a run for its money in the plug-in hybrid market.
Advertisement

Honda is set to enter the plug-in hybrid arena with the forthcoming 2014 Honda Accord PHEV. The automaker previously offered an Accord Hybrid, but the venture lasted a mere three years. Now, Honda will once again try its hand at the Hybrid market with all-new redesigned hybrid platform. Like the Ford Fusion Energi and Fusion Hybrid before it, Honda plans on releasing an Accord Plug-in Hybrid and Accord Hybrid.

Set to hit dealerships in early 2013, the Accord Plug-in Hybrid (PHEV) will have the capability of running in all-electric mode for 10 to 15 miles and a calculated total driving range of more than 500 miles. Although EPA estimates have not been disclosed, Honda expects the Accord plug-in Hybrid to best 100 MPGe, a figure comparable to the Fusion Energi.

The Accord Plug-in Hybrid boasts one of Honda’s four new efficient powertrains available on the all-new Accord models. It will be powered by the automaker’s first two-motor hybrid system, and utilizes the innovative Earth DreamsTM 2.0-liter i-VTEC 4-cylinder engine system, which produced 137 horsepower. The vehicle’s electronic driving is maintained by a 6.7 kilowatt-hour (kWh) lithium ion battery, capable of 196 horsepower. The Accord Plug-in Hybrid will serve as the foundation for the conventional hybrid Accord, due out in the summer of 2013.

In addition to full-electric mode, 2014 Accord PHEV owners will also be able to select to other driving modes. The vehicle’s second mode is a hybrid mode reminiscent of the Chevrolet Volt. The Accord PHEV’s hybrid mode uses an engine generator, which produces electricity for the drive motor. In it third driving mode, the electric motor receives additional power thanks to a gas engine mechanically connecting with the drive wheels. Also, the engine will be engaged whenever full acceleration is reached.

Click HERE for more images of the 2014 Honda Accord PHEV.