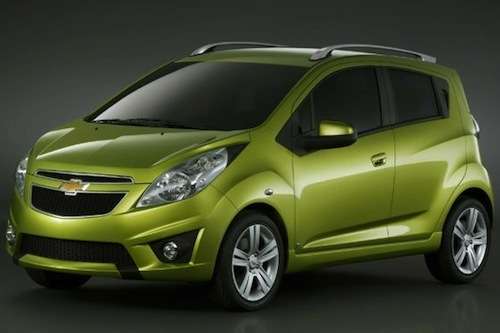 Chevy Spark to make US debut in August, aimed at urban market

GM hopes that the Spark's success overseas will translate into the U.S. market.
Advertisement

General Motors has just announced that the Chevrolet Spark will make its U.S. debut in August. Although much of the Spark’s appeal is relegated to its fuel economy, it will be released at a time when gas prices are on the decline. That said, GM will likely tout the vehicles “millennial” oriented features in order to increase its consumer appeal. The mini-car, which is already available in 100 markets worldwide, will be primarily aimed at the urban market in America.

“We listened to what young people said they wanted in a car. Our engineers tuned and equipped the Chevrolet Spark specifically for first-time buyers and city dwellers in North America,” said Chris Perry, vice president of Chevrolet Global Marketing in a press release. “Spark is the perfect urban car because we’ve made it easy to drive, easy to park and easy to own.”

The Spark is GM’s first attempt to break into the mini-car segment, which is currently dominated by the likes of the Mini Cooper and Fiat 500. According to Perry, the mini market has never been particularly strong in the U.S., which gives the Spark an opening for success.

"It's been very successful for us around the globe, so the decision was, can we get some incremental sales out of this, can we bring some people into the franchise that we haven't seen in the past? Let's see how it goes," Perry said to USA Today.

One way in which the Spark looks to tap into the American lexicon is through its unique urban oriented sensibilities. Consumers interested in conquering those pesky hills will be pleased with the Spark’s Hill Start Assist and Panic Brake Assist, both standard on the vehicle. Also, the Spark is well suited to park in even the tightest parking spots with its miniscule size of just 144 inches in length and 63 inches wide.

While its small size and maneuverability will appeal to many, its connectivity is innovative enough to entice most young people. The Spark is equipped with Chevrolet MyLink, a system that enables users to access Pandora, Stitcher, Bluetooth and GPS. Drivers can also connect their smartphone and USB devices to play movies, download contacts and display pictures.

As for appearance, the Spark features 15-inch alloy wheels, making it the only vehicle in its class to come standard with alloy wheels. The mini-car also boasts a number of styling enhancements compared to overseas Spark models. The North American edition contains a more pronounced front grille, restyled fog lamps and overall aggressive styling.