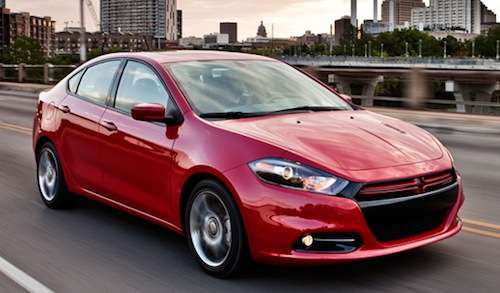 Dodge Dart tops KBB's list of the coolest cars of 2012

KBB.com has just released their annual list of the Top 10 coolest cars of 2012. See if your favorite vehicle made the cut.
Advertisement

Let’s face it; most people want to drive a car that makes them look cool. But what about individuals that want to look cool and be thrifty? Well, the folks over at KBB.com have just comprised a list of the 10 Coolest Cars Under $18,000. Not only are these vehicles hip and relatively inexpensive, half of them offer impressive fuel economies of 40 mpg or greater. So without further ado, here is KBB.com’s list of the 10 Coolest Cars Under $18,000:

1. 2013 Dodge Dart – Earning the top spot on the list is the Dodge Dart, which was a collaborative endeavor between Chrysler Group and Fiat. According to KBB.com, the Dart possesses an “enticing combination of style, performance, features and value.” Perhaps the most versatile vehicle on the list, the 2013 Dart comes in SE, SXT, Rallye, Limited, R/T and Aero models.

2. 2012 Hyundai Veloster – Although the 2012’s Veloster’s sticker price is slightly north of $18,000, KBB.com states that the vehicles Fair Purchase Price is roughly $17,300, which qualifies it for the list. Though some may consider the Veloster’s exterior a bit strange, KBB.com argues that it is one its greatest strength. Aside from a striking exterior, the Veloster’s interior contains a plethora of standard features that will satisfy most tech savvy drivers.

3. 2012 Fiat 500 – The first Fiat to be sold in the states in nearly thirty years, the Fiat 500 earned a place on KBB’s list due to its charming Italian design and small size. As might be expected, the Fiat 500’s tiny size allows drivers to easily park the vehicle no matter the circumstances.

4. 2012 Mazda3 – Once again appearing on KBB’s annual list, the Mazda3 has stepped up its game in 2012 with the introduction of the all-new SKYACTIV powertain. In addition to the added fuel economy obtained with its new SKYACTIV technology, the Mazda3 is also a fun to drive car with impressive performance.

5. 2012 Chevrolet Sonic – Available in hatchback and sedan, the 2012 Sonic is sporty new subcompact has a fuel efficient, yet peppy engine. Adding to the vehicle’s cool points is its innovative motorcycle inspired interior.

6. 2012 Ford Fiesta – Just missing the top 5, the 2012 Fiesta is an American car that is receiving praise for its European-like driving style. This fuel miser gets a solid 38 mpg with the base model and 40 mpg for the SFE version. Fuel economy aside, the 2012 Fiesta also contains upscale tech features, quality interior and fun color options.

7. 2012 Honda Fit – Next up is the Honda Fit, which has been a perpetual favorite on KBB’s Coolest Cars list since its US debut. The 2012 Fit is fun to drive, contains spacious rear seats and touts some innovative storage options. Not to mention, its distinct appearance sets it apart from most vehicles on the road.

8. 2012 Kia Soul – While consumer and reviewers have considered the Kia Soul’s unique look a strength in the past, the 2012 model “cranks up the cool,” according to KBB.com. Kia has tweaked the Soul’s nose and tail for the 2012 model-year, as well as improved its drivetrain. In fact, the 2012 Soul features a new 1.6-liter direct-injected base engine, with the option of a 2.0-liter upgrade.

9. 2012 Scion iQ – Coming in at just under $16,000 is the all-new Scion iQ. This tiny compact vehicle is perfect for cruising around the city and is a cinch to park in tight places. The iQ also boasts an impressive list of standard features and surprisingly comfortable front seats.

10. 2012 Volkswagen Jetta – Lastly, just making its way onto the list, is Volkswagen’s best-selling model. With an MSRP of $16,285, the 2012 Jetta allows consumers to obtain a sedan with sleek styling and an impressive European driving feel, all at an economy price. Not to mention, the 2012 Jetta comes with a full warranty and notable digital connectivity.

What do you think of KBB.com’s list? Do you agree with the 2013 Dart earning top honors or would you put another car its place?

Joanne wrote on September 23, 2012 - 1:16am Permalink
I'm amazed, I must say. Seldom do I encounter a blog that's both educative and amusing, and without a doubt, you have hit the nail on the head. The issue is something that not enough men and women are speaking intelligently about. I am very happy I stumbled across this in my search for something regarding this.
west end flower shop wrote on September 23, 2012 - 1:22am Permalink
Excellent post. I used to be checking continuously this blog and I'm impressed! Very helpful information particularly the final section :) I maintain such information a lot. I used to be looking for this particular info for a very lengthy time. Thanks and best of luck.
Mama Taz wrote on October 21, 2012 - 4:27pm Permalink
2013 Dart turbo 1.4. 6 on the floor sits in my driveway. I'm feeling very patriotic lately and decided to come back to American made cars. Just came off a Nissan lease. Was with them for 15 years. Loving every minute of my Dart so far....go test drive one. The Hyundai was sluggish to me...The Dart was priced perfect for me.