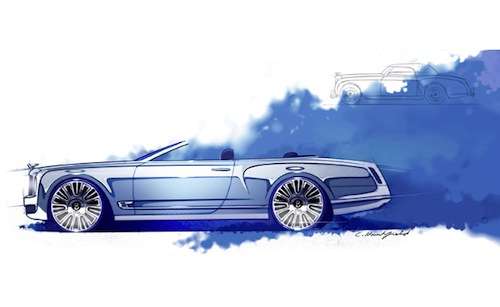 The luxury automaker is calling its upcoming vehicle the “world’s most elegant and sophisticated convertible."
Advertisement

Bentley has just given luxury enthusiasts a sneak peak at the upcoming Mulsanne Convertible Concept. The big reveal occurred earlier today at the Pebble Beach Concours d’Elegance, three years after the Mulsanne sedan made its debut at the same event.

As for its appearance, the Mulsanne Convertible is sportiness and elegance all rolled into one. The vehicle also boasts a “muscular” look via its sculpted lines.

Interior-wise, the Mulsanne Convertible’s cabin was inspired by high-performance power boats. In order to maintain its standing as a leader in handcrafted automotive luxury, the convertible’s interior offers a chic, modern design, superior refinement and opulent materials.

Speaking of the Mulsanne Convertible, Wolfgang Dürheimer, Bentley’s Chairman and Chief Executive said: "The modern, luxurious, high-tech Mulsanne saloon provides a perfect foundation on which to create the world's most elegant convertible. The Convertible Concept will extend the appeal of the Mulsanne family, while enhancing the profile of the Bentley brand, particularly in new and emerging markets."

Convertibles are not a new venture for Bentley. In fact, the luxury automaker first began manufacturing open-top cars in the 1920s. Bentley has produced a number of distinct convertibles over the years including the Park Ward S1 Drophead Coupe, the Corniche, and the recent Azure.

The Bentley Mulsanne was first introduced in in 1980 as a performance luxury car. Models such as the Continental T and Azure were derived from the Mulsanne, which was discontinued in 1992. The defunct line was reintroduced in 2010 as a 6.75-liter V8 high-end luxury vehicle. The current Mulsanne has the unique distinction of being the the first flagship car to be independently designed by Bentley in almost 80 years. The vehicle’s name comes from Mulsanne Straight, a stretch of the Le Mans racing circuit. Bentley has won the 24 Hours of Le Mans race six times, including its most recent victory in 2003.