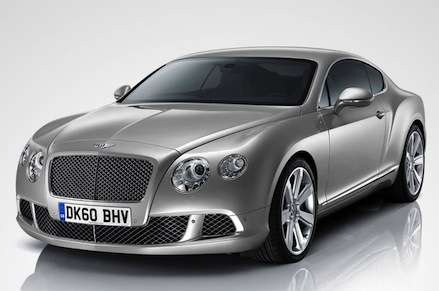 Bentley plans to double annual sales by 2017 - Find out how

Though the luxury car company sold just over 7,000 vehicles last year, Bentley has its sights set on 15,000 in annual sales in just 5 years.
Advertisement

Bentley CEO Wolfgang Duerheimer announced that the automaker hopes to double its annual sales by 2017, with help from wealthy Chinese buyers, a rebounding U.S. economy and new market expansion. Duerheimer, who made the comments to Automotive News Europe, also claimed that China is poised to overtake America as Bentley’s largest sales region by year’s end. Duerheimer has been Bentley’s CEO for one year and is the former head of Porsche R&D.

"We are currently experiencing a boom in China, where our sales almost doubled to 1,839 vehicles in 2011. That made China Bentley's second-largest single market. It will likely advance into the No. 1 spot this year," said Duerheimer.

According to Duerheimer, Bentley has set an annual sales goal of 15,000 vehicles five years from now. The objective seems a bit lofty since Bentley sold just 7,003 vehicles last year, but the British car company believes it is achievable. Aside from China, Duerheimer is banking on increased American sales as well. Duerheimer told Automotive News Europe: "I am assuming a robust, double-digit growth for 2012. I expect growth of more than 10 percent for Bentley in China and the United States in 2012."

Aside from an expected sales influx in America and China, Duerheimer believes that sales are prepared to boom in mainland Europe and Russia as well.

"In continental Europe, we have to sound the attack," he said. "We sold 1,187 units, or about 17 percent of our sales, in this region in 2011. With UK sales of 1,031 vehicles, we sold almost as many Bentleys in the UK as in mainland Europe," according to Duerheimer. The CEO went on to say: "I am calling on our sales organization to exploit the undeniable potential in continental Europe to a much greater degree."

Bentley hopes that launching a new SUV will help the automaker attain the sales numbers they are seeking. Bentley plans to debut the SUV in three years, pending patent approval. Duerheimer expects that SUV sales will account for 3,000-5,000 in annual sales once introduced.

The final component to Bentley’s sales strategy is adding more dealerships worldwide. Bentley is set to add 25 dealerships globally in 2012, with 10 in China alone. The automaker currently owns 161 dealers worldwide, including 60 in Europe, 40 in the U.S. and 15 in China.

Walter Owen Bentley, a famous rotary aero engine designer, founded Bentley in 1919. W.O. Bentley was also widely recognized for conceiving some of the best production model racecars of his day. Bentley’s vehicles won the 24 hours of Le Mans sport car race in 1924 and 1927-1930. The automaker was purchased by Rolls-Royce in 1931, who moved production from London to Derby and then to Crewe. In 1998, the Volkswagen Group of Germany purchased Bentley.

Visit BentleyMotors.com to find out more about the car company and its history.