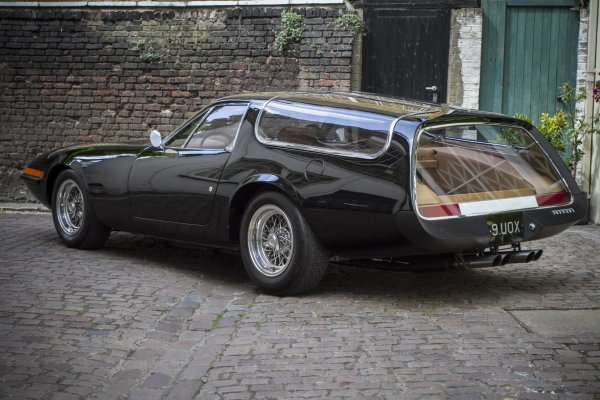 A unique Ferrari 365 GTB/4 'Daytona' Shooting Brake is being showcased at the Salon Prive.
Advertisement

The 1972 Ferrari 365 GTB/4 Shooting Brake was commissioned by Luigi Chinetti (Coco), Jr. Coachwork was done by Panther Westwinds and it was built at a cost of approximately four new Daytonas at the time, this particular car having come off the Ferrari line as number 805 of the series. The car begin as a 365 GTB/4 Berlinetta with Rosso Dino and Nero leather finishes. It was shipped to the United States to Chinetti Motors.

The car was on display in the Chinetti dealership when a real estate developer named Bob Gittleman walked in and asked for something very different. Looking at the beautiful car, as it was from the factory, he and Coco devised the idea of turning the Ferrari into a station wagon (ala Shooting Brake). The process took a lot of time. The car was first shipped to the United Kingdom two years later, after Coco had decided on utilizing Panther Westwinds as the coachbuilder.

Panther then began modifications on the car. Unique features include a double-gullwing rear hatch (rather than a tailgate), with the large rear windows opening to allow access to the interior. Wood trim was added throughout, including the floorboards of the rear load deck. The entire project was completed and returned to the U.S. in 1975, where it was delivered to Gittleman in Florida.

He kept the car until 1980, selling it to a Texas car collector named John, whose last name is now synonymous with high-end automotive auctions: Mecum. He sold it to a New Jersey collector Bill Kontes, adding to his extensive Ferrari collection. By the late 1990s, it was sold to a collector in France. That collector eventually began displaying it at Concours shows, first in Holland in 2000 and then others. It still has less than 4,000 miles on the odometer. Hexagon Classics acquired the Ferrari 365 GTB/4 Shooting Brake in 2014 and put it under a complete refurbish and bare metal repaint, returning it to concours condition.

A truly unique car that has no peer.