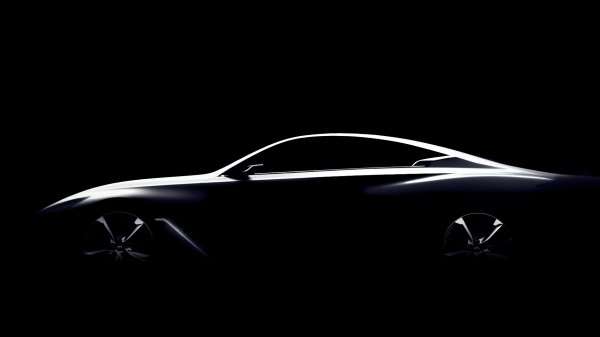 Infiniti Lightens Up on the Q60 Concept Tease

A teaser graphic of the upcoming Infiniti Q60 Concept has been revealed and it looks like a lighter version of the Q80 unveiled in Paris. Let's have a closer look.
Advertisement

Back when Infiniti swapped nomenclature on their naming conventions, the G37 split into the Q50 sedan and the Q60 coupe. Now, fast forward to the North American International Auto Show (NAIAS) in Detroit next month and you'll see the unveil for the newly-designed Q60 as a concept likely to be the production model for the 2016 model year.

So far, all we have is a teaser image from Infiniti for the Q60, shown above, but it makes a definite statement in design. The conceptual is similar in format to that teased for the Q80 that unveiled in Paris. You can see the concept proof here and the actual Q80 here and here.

The conceptual drawing form the Q80 in physical reality was very close, having the same lines and a lot of similarities to what we're seeing with this conceptual for the Q60. From there, we can assume that the actual Q60 Concept in physical form will be very much like the Q80, though obviously smaller due to its coupe design.

The current Q60 coupe is no slouch in style, but if the underpinnings of the new Q80 are to be taken at face value, we can guess that we might see the same 3.0-liter V6 and electric hybridization we saw in the Q80, which would definitely be something new for the Q60 and its segment.

That's not to knock against the current 3.7 that powers the Q60. It's a great engine and in that coupe makes for some very responsive driving. There is a chance that Infiniti plans to downsize the 3.7 to the new 3.0, however, for fuel economy, making up for the power difference with turbos or turning (or both). The new turbocharged 3.0 V6 outputs an amazing 450 horsepower. I don't think anyone would complain about that.

We'll see the Q60 Concept when it unveils in Detroit next month. I'll be there first-hand, as with a few other team members from Torque News, so you'll get the skinny from front-row, center.

Craig Darling wrote on December 14, 2014 - 3:11pm Permalink
Just so you know... the G37 Sedan is not the Q40 and not the Q50. (totally different car) the G37 coupes are now called the Q60's. Just thought I should share as one of the top Infiniti sales people in the country.
Aaron Turpen wrote on December 16, 2014 - 12:04am Permalink
The G37 sedan and coupe were once the same. Then the name changed and it became the Q50 and Q60, with some modifications to the design. The G37 was retained and is being made in Japan as an entry-level version of the Q50 but without the design changes. You can read the interview I did with Pierre Loing on this website about this if you'd like. Not once did I mention the Q40.