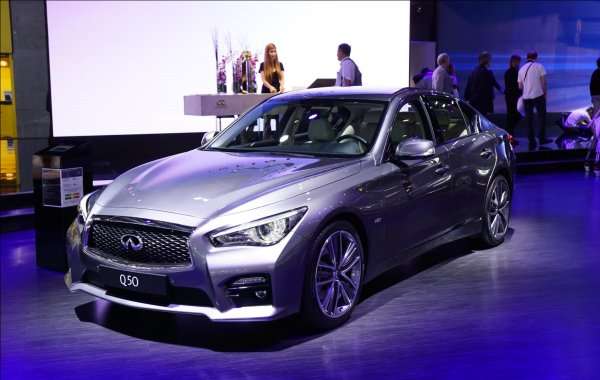 When Infiniti unveiled the Q80 Inspiration at the Paris Motor Show this week, all eyes were on the luscious exterior design and premium-level interior festooned with sumptuous technologies. In all of this, the innovative powertrain of the concept was overlooked.
Advertisement

The clear signal from Infiniti is that the premium brand plans to glide into the premium full-sized sedan category on four luxurious wheels. The Q80 Inspiration concept is a beautiful showcase of what the company plans to do it with. Yet in all the oohing and awwing over the beautiful car's exterior looks and interior refinement, somehow, the powertrain became a side note.

That could be a good thing, actually. It's a highly forward-thinking drivetrain and very thoughtfully conceived piece of engineering, but like most luxury vehicles, the focus should be on the car, not singular parts of it. We're going to step out of that box, however, and look closely at what powers this sculpted piece of steel down the highway.

To start with, as we initially reported when the Infiniti Q80 Inspiration unveiled, a hybrid-electric powertrain lies underneath that long, saloon-like hood. We mentioned that it was aiming for a 42-43 mpg achievement for the sedan - somewhere in the 5.5 liters to the 100 kilometers range. Here's how it will do that.

Infiniti uses a couple of six-cylinder engines in its lineup globally, most notably the beautifully-performing 3.7L housed in its Q50 sedan and Q60 coupe here in the U.S. For the Inspiration, however, the company is introducing the precursors to its new line of engines flagshipped by a new 3.0-liter twin-turbocharged V6 in this Q80. Amazingly, this V6 outputs 450 horsepower. It's coupled to a 9-speed automatic transmission which adds in an electric motor connected to a lithium-ion battery pack. That 75kW motor adds in, get this, 100 more horses to the mix.

Yes, folks. That makes the 42 mpg Q80 Inspiration a conceptual 550 horsepower sedan. Let that sink in for a moment.

Combined torque is 553 lb-ft (750 Newton meters), giving the car a theoretical 0-60 time of under four seconds. Top speed is limited to 155 mph. All of that power is distributed in an all-wheel drive system, giving all four sets of rubber a chance to churn on the pavement.

Torque splitting in the Q80's differential allows up to a 50% divide between front and rear axles, but will move to two-wheel (front-wheel drive) for efficiency when it's not needed. A switch allows the driver to force AWD when they wish. That would be recommended for the inevitable track runs this car will do if it's produced.

Given the amount of development done on the Infiniti Q80 Inspiration, it seems apparent that the carmaker is planning to launch this to market soon. We can only hope that means we'll get our hands on one soon as well.