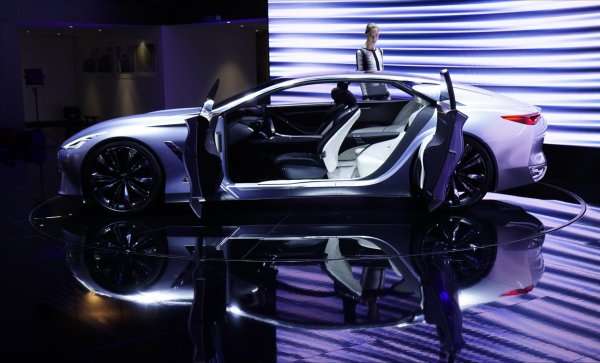 The beautiful exterior design of the car Infiniti says will become its future flagship has now been revealed to just be the eye candy covering the luscious near-futurism of the Inspiration's intent.
Advertisement

It is aggressively proportioned on the outside, with beautiful lines and a sport coupe look that belies its true four-door fastback configuration. According to Francois Bacon, Infiniti VP of Product Strategy, the Q80 is meant to disrupt the premium sedan category. The exterior is not how it will do it, it is just scratching the surface of what the Q80 Inspiration is all about.

Under that skin, as unveiled in Paris yesterday, is a strikingly simple, stylish interior. The double doors open to reveal a pillar-less entry for both front and rear with a four-seat configuration. Interior room is huge despite the fastback design, but the real fun comes when taking the driver's seat.

A heads-up display (HUD) is the focal point for the driver's interface. The passenger also has a HUD which can be used in connection with a portable device (smart phone, tablet, etc.) connected via telematics. All of the technology is ubiquitous and simple, however, rather than being in your face as with many concepts.

The Infiniti Q80 Inspiration is powered by a 3.0-liter V6 and hybrid-electric powertrain, giving it 550 horsepower. The engine is a precursor to a family of engines that Infiniti will introduce within the next two years. The car is aiming for fuel economy in the 42-43 mpg range. All-wheel drive on-demand, with driver-selectable rear-wheel to all-wheel capability, is another aim for the Q80.

The Inspiration also aims towards futurism by showcasing the full suite of Nissan's Autonomous Driving capabilities. Meant to enhance the driver in this case, however, the technology is unobtrusive and easily commanded. Cameras, lasers and sensors can be activated with a touch of a button and take over the car's operation quickly while being canceled or controlled at any time. The driver can "have dialogue" with the car through its HUD and touch-screen. Even automated driving can be controlled to make decisions and affect how the computer handles some situations, such as overtaking versus slowing to pass or pace slower traffic.

Infiniti has made it clear that the Q80 Inspiration is a precursor to a near-future production vehicle. It will be a premium-level entry at a higher price point and in a market that Infiniti has never entered before, so timing will be everything.