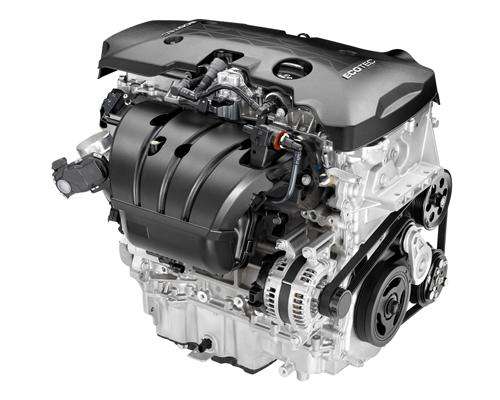 How the new Ecotec engine in the 2014 Chevrolet Impala got quieter, more efficient

The new 2.5-liter Ecotec engine in the 2014 Impala is quieter and more fuel efficient. Learn how they did it.
Advertisement

This month, the new 2014 Chevrolet Impala will enter dealerships and if last year's sales figures are anything to go by, most of those Impalas will be sold with the new Ecotec four-cylinder engine technology with its improved power and better fuel economy. This year, Chevy has a surprise waiting, though: the new engines are quieter and even more fuel efficient than before.

Three engines are in the Impala's lineup for the 2014 model year (a V-6 and two 4-cylinders), but so far this year, most of Chevrolet's car buyers have opted for a four-cylinder engine and it's very likely that this trend towards higher efficiency, given the excellent output those small engines produce, will continue.

In the new Ecotec, the 2014 Chevrolet Impala finds a more fuel efficient, quieter option and the engineers at General Motors worked hard to make it that way. The 2.5-liter Ecotec puts out 196 horsepower, 186 lb-ft of torque, and features an all-new rocker arm setup that improves quieter and more precise valve lifting than in previous engines, especially at higher speeds and heavier loads.

The rocker arm switches between low and high lift intake cam profiles, being actuated by an oil control valve through a dual-feed, stationary hydraulic lash adjuster. This is the first time it's been used in low friction roller-type finger-rollover valvetrains in a gasoline engine. It's entirely controlled by the engine's computer, which tunes lift based on the engine load profile. This means less noise and better fuel economy - up to a full mile per gallon in some cases.

It works by simply changing the profile of the rollers and rocker arms. Normally, the rocker arms are slightly-bent little crescents upon which the rollers on the camshaft press and release as their egg-shaped movements press and let go. As the rocker moves, it lifts and falls like the rails of a rocking chair. Underneath, on one side, is attached the valve which pulls open and pushes closed as the rocker arm rocks. This allows intake of the fuel-air mixture as the engine fires and exhausts.

Normally, the rockers and camshaft are relatively noisy things, clacking against one another, and this is usually mitigated (along with the wear and tear that metal-on-metal causes) by circulating a continuous stream of lubricating engine oil over everything. It's imperative that all of this be in perfect tune as this is the primary way your engine's timing is controlled - by the roll and push of those camshafts, rockers, and valves.

Chevrolet altered this somewhat by changing the shape of the rocker arm to what's known as a "finger follower." This is a movable contact point on the rocker that can engage different points on the camshaft's roller. That finger is controlled by a small oil control valve which uses pressurized engine oil to shift the finger. This allows the rocker to have two settings: low and high. The lower setting lifts less than the higher, changing how high the valve is lifted and thus how much air is let into the chamber. This vastly improves efficiency while at the same time lowering noise levels because of the smaller amount of movement required in the low-end of things (slower speeds/RPM).

To further reduce noise, Chevrolet says that "The redesigned large sedan’s 2.5L engine with direct injection is engineered to be one of the quietest and most refined in the segment. The development team reduced engine noise intensity by 40 percent by specifically targeting the 2.5L’s noise frequency signature. They pushed radiated noises into a higher frequency range well above 2,000 hertz, which is more pleasing to the ear – particularly in the high-load operating ranges where engine sound is most intense."