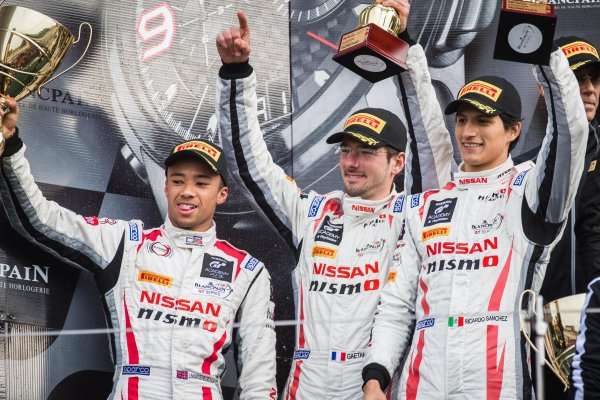 At Silverstone, during a lead-up to Le Mans, and in the new Micra Cup, three Nissan GT Academy winners took the podium at three separate events on three continents. All roads lead to Le Mans.
Advertisement

In the Nissan GT-R NISMO GT3 #22 at Silverstone during the Blancpain Endurance Series, drivers Jann Mardenborough, Gaetan Paletou, and Ricardo Sanchez (pictured above) took second place in the PRO-AM class after three hours of hard scrimmage. The #23 car, another GT-R, finished in the teens after a backmarker contact in the early race hampered its progress throughout. That despite the #23 holding the pole position after a strong run in qualifying by Alex Buncombe.

“Everything was going well until I came across the Ferrari,” Wolfgang Reip, the starting driver for the #23, explained. “He moved to the right so I thought, ‘great, he is letting me through.’ But then he braked and pulled in front of me, so all I could do was hit him.” Both Buncombe and Mardenborough will be in France Sunday for the Le Mans Test Day in their GT-R LM NISMOs.

Meanwhile, over in the Japanese Formula 3 Championship, Lucas Ordonez, one of the pilots for this year's first-time entry in the Lemans 24 Hours for Nissan, took the podium with second place in race one and fourth in race two of the F3. Ordonez is also headed for France for the Le Mans Test Day.

“I’ve been working hard on not losing places at the start of the F3 races, and that work is really starting to pay off,” said Ordóñez. “In race one, I went from fifth to second, and then in race two I got up to third from fifth."

Finally, the Nissan Micra Cup had its inaugural race to launch this first season of micro car racing in Canada. The first two race wins in the series went to 2014 GT Academy Thailand winner Thanaroj Tanasitnitikate. He became a crowd favorite after winning the first race and then donating the winnings, $1,500, to another driver who'd rolled his car so that it could be repaired for the next round. In that second round, Tanasitnitikate once again took the win.