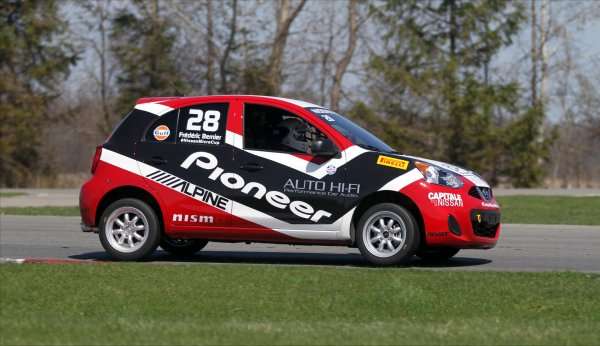 So You Have a Tiny Nissan Micra? Let's Race!

The first Nissan Micra Cup series kicks off this year in Canada this Friday. More than 25 drivers will vie for the win next weekend in cars so small, they're called Micra.
Advertisement

The Nissan Micra Cup sees its inaugural season open this next weekend as qualifications begin on Friday the 22 of May and races begin Saturday at the Circuit Mont-Tremblant as part of the Spring Classic event. This will be the first one-make race event Nissan has had in Canada and it will feature the Micra, a tiny car made specifically for a Canadian audience.

JD Promotion & Competition is collaborating with Nissan Canada to make the race series happen. Called "the most affordable race series in Canaidan motorsport," the Nissan Micra Cup will kick off with more than twenty-five drivers taking the track.

"The Nissan Micra, this subcompact, fun-to-drive car, is extremely well-suited to the track, as proven through over 35 hours of extensive testing, in addition to the long hours each of the 25 Micra Cup race cars spent in weekend-long testing sessions this month with their respective drivers," says Jacques Deshaies, owner of JD Promotion & Competition. "Seeing the idea to offer Canadians an affordable, exciting racing series come to fruition brings me immense joy. I am thankful to Nissan Canada for helping me realize this dream, and with a car that has truly risen to the challenge – the stock Nissan Micra S."

Drivers include some surprise entries such as Marc-Andre Bergeron, ice hockey legend, and Canadian Touring Car Championship notable Valerie Chiasson will also take the field. Nissan GT Academy graduates Ahinay Bikkani and Thanaroj Thanasitnitiket are also going to be present and driving Micras on the track. They will be joined by a nine rookie drivers. Even NASCAR competitor Marc-Antoine Demers will be hitting the track in a Micra. Finally, Canadian karting champion Francis Mondou, considered a favorite for the championship in this first Micra Cup season, will be competing. Most of the cars in the Nissan Mira Cup are sponsored by dealerships and race teams throughout Canada.

Friday begins the event with two half-hour practice sessions. Qualifying begins Saturday the 23rd at 9:30 am with the first race at 1:30 that afternoon. The second round takes place on Sunday afternoon. Nissan Micra Cup races, like their diminutive cars, are short-duration 30-minute runs.