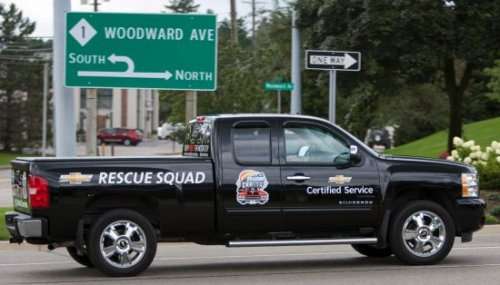 General Motors has events planned all week for the Woodward Dream Cruise in Detroit, including sponsorship of the Dream Cruise itself on the 60th anniversary of the legendary Corvette.
Advertisement

General Motors is the presenting sponsor at this years Woodward Dream Cruise, Detroit's largest outdoor automotive event in which millions of car fans come together (rain or shine) to see showcases of cars of legend and renown. It's the world's largest one-day event, happening on Saturday, August 18th.

Leading up to the event, GM has several things happening including yesterday's Chevrolet Volt Owner Ice Cream Social in which 50 Volt owners were invited to ice cream at the Radisson Hotel in Bloomfield Hills and then took a silent electric Volt cruise down Woodward. Today is the Design Car Show hosted by the GM Design Team showing personal vehicles of GM designers to the public.

Finally, on Saturday, in Chevy's Bingham Triangle, the company will host several showcases of various GM vehicles of past and present. This will include a life-sized Corvette timeline showing milestone engines from the model's 60-year history. Detroit graffiti artist Shades will be painting a Corvette-inspired mural throughout the day as a backdrop to the display.

Chevrolet will also be giving honor to the military and their historical part in it. Heritage and specialty vehicles will be on display as well as a Modern Family display to show family-oriented vehicles and accessories.

Last, but not least, as the photo implies, Chevrolet is also the official breakdown response provider and will have Rescue Squad trucks on hand for owners of any car brand who require assistance with towing, flat tires, dead batteries, etc. This is provided through local GM dealers Matthew Hargreaves Chevrolet and Les Stanford Chevrolet.

Joining the other two Detroit automakers, GM will be making this one of the biggest Woodward events yet. Chrysler will have more vehicles than ever before at the event and Ford will be celebrating 20 years of SVT.