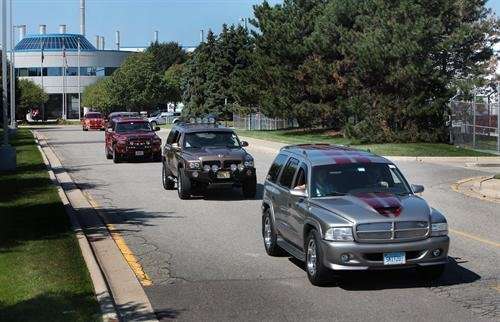 Chrysler showing off classics of yesterday and today at Woodward

The 18th annual Woodward Dream Cruise will have a strong showing from Chrysler this year, showing the largest number of vehicles they've ever had at the event.
Advertisement

The Chrysler Group will showcase its largest bevvy of vehicles ever at Detroit's Woodward Dream Cruise this year, marking the event's 18th annual appearance as millions of car fans converge on Motor City.

Chrysler, Jeep, Dodge, Ram, Fiat, SRT and Mopar will all be present with vehicles from the past and present on display. The Dodge Durango Club will be parading from Chrysler HQ to the event (shown here) to kick things off on Saturday, August 18 at the corner of Woodward and 13 mile in Royal Oak, Michigan.

The Dodge brand will be big at this year's event, bringing classic cars of many eras, including Speed TV's Steve Magnante in a 1970 Dodge Polara as he interviews vintage and current Dodge vehicle owners for the Dodge blog at redlinedodge.com, starting today. Other Dodge showings will include the 2013 Dodge Dart Rally Car (with 600 horsepower) and the 2013 SRT Viper that everyone's been talking about.

More than 75 vehicles from the Chrysler Group will be there with Dodge, including more than a dozen selections from the celebrated Walter P. Chrysler Museum. Many Moparized cars and trucks will be shown by owners and fitters and visitors will be treated to an up-close look at the awesome Raminator Monster Truck.

Interactive displays and mobile exhibits will round out the Chrysler area, giving hands-on demonstrations of key Chrysler technologies in the Uconnect trailer and more. Mopar performance parts, accessories, and more will be on hand for demonstrations and merchandise featuring the popular new Chrysler tags "Imported from Detroit" and the Batman-affiliated "Imported from Gotham City".

This year's Woodward Dream Cruise is shaping up to be a big one. As reported yesterday, Ford will be showcasing 20 years of SVT and will be bringing plenty of Mustang to the event. GM will be celebrating 60 years of Corvette.