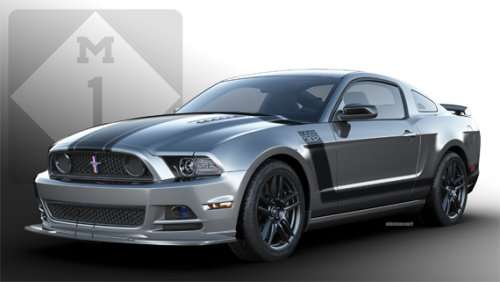 This weekend will be the annual Woodward Dream Cruise and Ford will be celebrating 20 years of Mustang SVT performance culminating in the raffling of a one-of-a-kind Ford Mustang Boss.
Advertisement

Every year, rain or shine, Detroit holds its popular Woodward Dream Cruise event at the intersection of 9 Mile Road and Woodward Avenue in Ferndale, Michigan (just north of Detroit). The spot transforms into one of the nation's largest outdoor car shows and this year will feature Mustang Alley as more than a million car fans from around the nation converge for this singular event, free to fans who want to show off their rides and check out the latest ponies.

This year will feature a special 20th anniversary showcase of Special Vehicle Team (SVT) vehicles from its beginnings in 1993 to present, with specialty cars and trucks from Ford's lineup of competition vehicles including stock racing, small engine racing, rally cross and more.

A special "Burn Out Box" featuring celebrity guest Vaughn Gittin Jr. and Ford Motor Co pro drivers will perform power displays. Classic cars from Ford and its fans will also be on display, including a full history of Mustang with a total of a massive 40,000 classic and antique vehicles expected to be on display this weekend.

The event will feature a $10/ticket raffle for a one-of-a-kind 2013 Ford Mustang Boss 302 Laguna Seca with proceeds going to benefit the Multiple Sclerosis Society of Michigan. Other giveaways and events will center around the legendary Mustangs of yesteryear as well as the trend-setting powerhouses of today.

In fact, the full Mustang line will be on display this weekend, including the 662-horsepower monster 2013 Shelby GT500, both the street and the racing version of the Boss 302 (plus the raffle car), and the Mustang GT and V6 Coupe with Performance Package. More than 800 classic Mustangs from 1964 onward will be at the event as well.

Raffle tickets can be pre-purchased from the National Alms Society at this link, which also has official rules and full vehicle specifications.

Also at Woodward this year will be Chrysler with more vehicles than ever before and General Motors celebrating 60 years of Corvette.