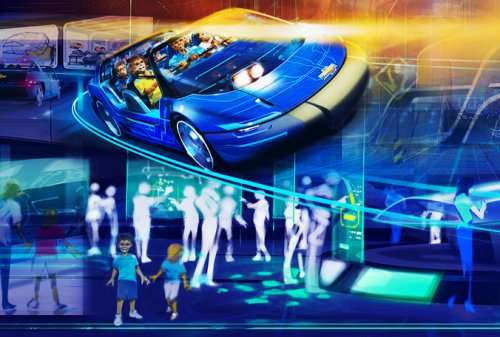 Walt Disney World in Orlando has been working with Chevrolet on a completely new version of its popular Test Track ride at Epcot.
Advertisement

Closed since April for renovations, the Test Drive ride at Disney's Epcot Center in Orlando, Florida has been eagerly anticipated by fans and gear heads alike. Disney says the ride will re-open on December 6 and has been completely re-imagined, getting a bottom-up re-think and reconfiguration.

In partnership with Chevrolet, the Test Track featured vehicle testing using Chevy-inspired automobiles. While that proved popular, fans were often asking for more and so both companies decided to close the attraction for a re-build. This new ride, while still featuring test drives, does so in cars designed entirely by the guest.

Disney has given a sneak peak into the upcoming reopening with an artist's rendering of the ride (pictured). It is definitely a lot more futuristic than the original and if the descriptions given by the engineers building it are to form, it will be awesome.

The new Chevrolet-sponsored ride will focus on the design process with the Test Track drive being the finale rather than the entire attraction. Guests will be able to enter Test Track Presented by Chevrolet (it's new title) and create custom concept vehicles to drive. Disney's signature upbeat atmosphere of music, flashing media, and dramatic lighting will punctuate the attraction to create ambiance.

Most of the design process will take place on touch screens with various options and ideas. Guests can start from a base chassis design (one of several) or from an already-made Chevrolet concept car. Choices in design modifications and additions are offered as the guest goes through the process of building their own custom ride. From there, they then put it through its paces on the Test Track circuit.

December 6th is not just the opening day for this new attraction. Epcot will also be opening its New Fantasyland area in the Magic Kingdom.