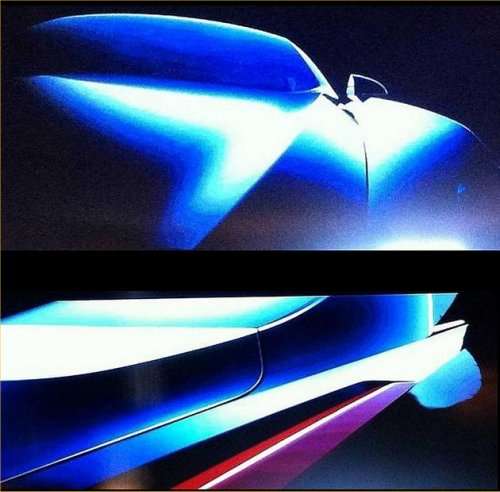 A surprise and rumor-stirring reveal from Cadillac features two images of a concept promised for an unnamed 2013 auto show.
Advertisement

Dubbed the "glamor concept" by the press, the Cadillac conceptuals were revealed at the 2012 Pebble Beach Concours d'Elegance. Cadillac says that the renderings are a glimpse of a concept car they will debut next year at an as-yet-to-be-named auto show.

Speculation about the car has run wild in the weekend blogsophere as people try to make sense of the smattering of information General Motors' premium brand was willing to give up at the show. Most of it hinges on the informal slogan displayed with the drawings, reading "American glamour meets American technology." Note the European spelling of "glamour."

The renderings were briefly shown in Monterey, California during the Concours at a media gathering. A very short presentation by Clay Dean, the director of advanced design at Cadillac, gave the above-quoted slogan as well as a few hints as to what this is all about.

The car is an attempt to "reflect back not for nostalgia, but what made us great at the time," Dean said. Outside of this statement along with the slogan, nothing more is offered by Cadillac to explain the images (put together into a composite here).

They appear to show an aggressive, if somewhat generic, hood and fender atop which a simple windscreen and modern-styled sharp side mirror is mounted. The hood itself has a deep curve where it meets the fender, suggesting a heavily-gouged V-shape and retro-style up-chopped fender. A sharp line from the lower edge of the windshield and swooping down towards the center grille is another indicator of a 1940s-esque body cut. The hint of a tower-shaped detail, possibly a headlight or turn signal detail, is visible at the front edge of the fender as well.

The side detail (lower portion of image) is nondescript and hard to place. It could be the rear end, running boards, or the bottom of the front end shown above.

Rumors say that the concept could be the rear-drive sedan promised in May by GM's North American President Mark Reuss. This would be competition for BMW's 7-series and the Mercedes-Benz S-class. Given the European spelling in the slogan, it's possible this could be the case, but the link is tenuous at best.

Whatever it is, we'll learn more as the year progresses and the 2013 auto show it will debut in draws nearer (New York? Chicago? Detroit?).