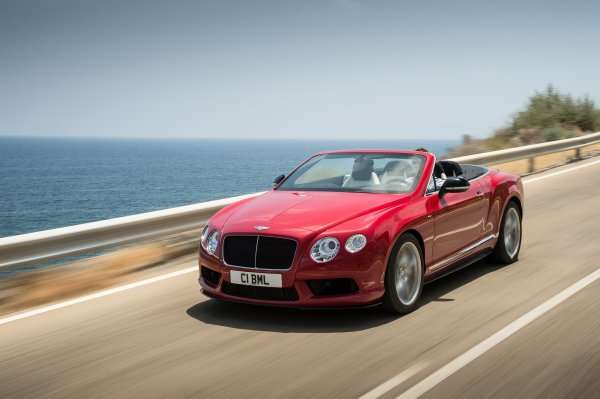 As if the Bentley Continental GT Convertible and Coupe were not beautiful enough, the Crew at Crewe is offering a sportier S model with even more driving excellence.
Advertisement

According to Bentley, the S models will add more "sporting edge" to the Continental GT line. It may be difficult to imagine how that could be accomplished, but for the Crewe, it was a matter of course.

The already impressive and beautifully-designed Continental GT coupe and convertible are the very definition of luxury grand tourers with efficiently powerful twin-turbo V8s under the hood. Bentley tightened the suspension and handling, lowered the chassis and upgraded cross-cue performance, and improved the engine's output and range.

This gives the Continental GT S models a range of more than 500 miles per tank of fuel, sportier design cues, a lower, more road-commanding ride, and a sportier response overall.

Even with the updated tuning for that powerful V8, though, the Continental GT S models will still achieve their class-leading fuel economy and range. With a combined Euro cycle MPG of 26.8 and CO2 emissions of 246 g/km in the coupe, the Bentley Continental GT S is still an efficiency leader. The convertible achieves 25.9 mpg and 254 g/km CO2 emissions.

This impressive combination of power, performance and economy is the result of an array of advanced technologies employed in the design of the Bentley V8 engine. Variable displacement, in which four of the eight cylinders shut down when cruising, reduces fuel consumption without any loss of refinement. When more power is required, the engine switches back automatically and seamlessly to the full eight cylinders.

Suspension and Chassis Upticks
The increased power from the Bentley Continental GT S models' engines meant a chance to sport tune the chassis as well. The Crew at Crewe was challeneged to improve sportiness without compromising the legendary luxury ride comfort Bentley is known for.

The aluminum double-wishbone front and trapezoidal multi-link rear self-leveling air suspension from the Continental GT remains on the S series. The GT V8 S, however, sees improved tuning, 10mm lower suspension height with increased spring rates, and revised damping to improve responsiveness. Bush stiffness was also raised by 70 percent which lead to stiffening the rear anti-roll bar to compensate. Steering was then recalibrated to add precision and feedback with improved software and toe-camber.

Sporty Design Cues on the GT S
For the new ‘S models, the design of the Continental takes a more dramatic direction and its enhanced road presence is clear before a wheel is turned. The lowered suspension provides a more sleek and purposeful stance, complemented by unique, lower-body styling including a sharp front splitter, discrete side sills and subtle rear diffuser finished in Beluga gloss. The black gloss radiator grille with single chrome divider bar and ‘figure of eight’ exhaust tail pipes instantly signify the powerful V8 engine.

The signature 20-inch wheels are unique to the ‘S’ models with an open-spoke design that reveals distinctive, red-painted brake calipers. Subtle ‘V8 S’ badges are applied to each front fender, and as with the other members of the Continental V8 family, the famous Bentley Wings badges feature a red center.