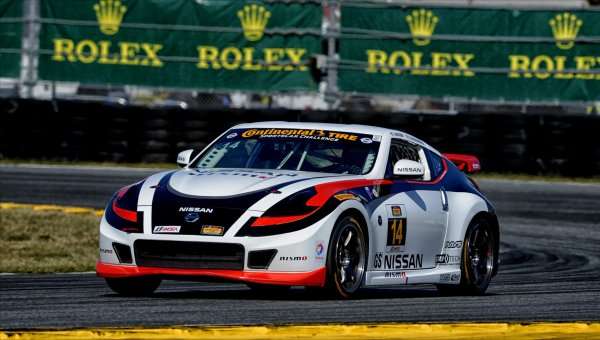 A wreck, breakdown, and miscall during the race put Nissan's driving affiliates out of the Daytona 24, but they're looking forward to Sebring for a comeback.
Advertisement

The Rolex 24 at Daytona was a grueling, but excellent race with surprises all around. It was a race of firsts, but tough luck kept the Nissan affiliate teams from making a big 2014 debut on America's most loved race track.

The Contintental Tire Sportscar Challenge Championship opened with Doran Racing fielding two Nissan 370Z NISMO cars while Time Bell Racing had another while the Skullcandy Nissan Altima made it four. Of the four cars, though, only two finished the race, one limping into the finish and the other losing after a position loss during caution periods.

The Doran Racing #41 started near the back of the field after a crash in the qualifiers left it with no time post. On only the second race lap, having made good progress moving towards the front, the car was blindsided by an errant competitor who missed the Bus Stop and totaled the car. The team may have to re-build the frame for Sebring.

The other Doran car, #14, started out as 15th in the GS class and was working towards 11th about halfway through the 24 hours. Just before its driver swap, though, the clutch gave out and the car was pushed behind the wall where it stayed for the remainder of the race - the first such failure for the 370Z.

Time Bell Racing placed number 11 and was gaining fast, despite a spin out early in the race. Towards the end of the race, however, the car was struck from behind, but was able to limp into the finish at 23rd, a far cry from the second position it had held earlier.

The Skullcandy Nissan Altima was in the Street Tuner class and piloted by GT Academy 2011 Champion Bryan Heitkotter, but only made it through the first hour of the race before sliding into the third position on the track. At the driver change, however, the car was pushed back twenty positions during long caution periods and was not given a pass around on the end of the lead lap, losing its position, which it never regained. He finished 23rd.

All in all, a tough 24 hours for the Nissan teams, but they're fired up for the Sebring 12 Hours next month - a track more suited to the 370Z's strengths. That race will be followed by Laguna Seca in California in May.

For more race news, make sure to read about the historic face off between the new Corvette and the SRT Viper, a Rolex 24 first.